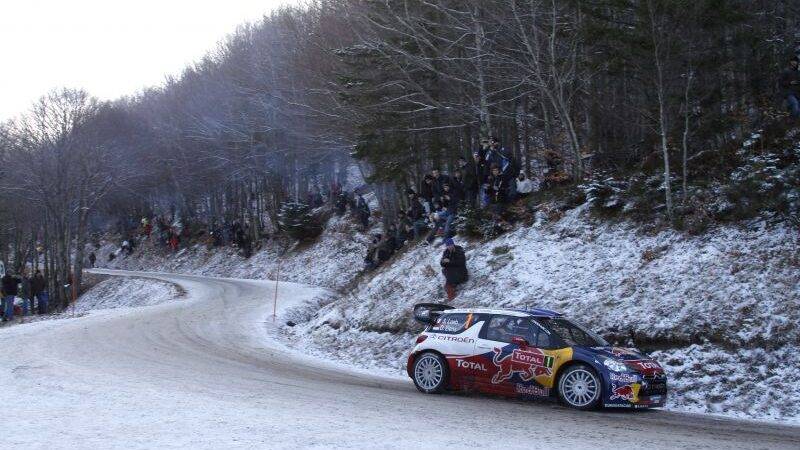 Disputed on stages in the Ardèche, day one of the 80th Rallye Monte-Carlo more than lived up to expectations. Sébastien Loeb and Daniel Elena let their driving do the talking as they chalked up three fastest times out of four. The eight-time World Champions ended the first day at the top of the standings.

The tension was already palpable as the driver pairings chose their tyres for the rally’s first two special stages. The Citroën DS3 WRCs opted to fit four soft slick tyres and put studded tyres on the two spare wheels. Sébastien Loeb and Daniel Elena kicked off the season with the fastest time on the Le Moulinon – Entraigues stage. However, as expected, the morning’s decisive times were set on the Burzet – St Martial stage, with around ten kilometres of snow-covered roads.

As the cars stopped at the end of SS2, Loeb had lost over 50 seconds to Jari-Matti Latvala, who had used extra-soft tyres. At that point, the Citroën driver trailed the leader by 30 seconds in the overall standings. “I didn’t think the time differences would be so big. We took a bit of gamble in putting on a mix of slicks and studded tyres,” commented Seb when he got back to the Valence service park. “It wasn’t much fun driving in these conditions, but we didn’t come out of it too badly. At a Rallye Monte-Carlo, this kind of gap is never insurmountable.”

The day continued with a second run over the stages in the Ardèche. This time with extra-soft tyres fitted, Sébastien Loeb was able to hit back at his rivals. After setting the fastest time on SS3 by four tenths of a second, he then moved into the overall lead in the rally after SS4, in which Latvala went off.

“We didn’t have the best tyres this morning, but I knew that I could put in a big performance this afternoon because I had the right tyres. As soon as we hit the tarmac between two snow-covered sections, the extra-soft tyres provided me with exceptional grip,” analysed the eight-time World Champion at the end of day one. “It’s a shame that Jari-Matti is out of the race because it would have been very close this evening and we could have looked forward to a good scrap tomorrow. In any case, holding a one-minute lead over Sordo and Solberg means I can’t afford to relax at all!”

Mikko Hirvonen had a more taxing day. After making a good start on SS1, the Finn acknowledged that he had been too cautious on SS2. At the start of the afternoon, he broke a rear brake disc following a minor impact on SS3. He was forced to remove the brake disc, and had to complete the day’s final stage with no brakes on one wheel. “It was a difficult day but I am pleased to be here,” confirmed the 2011 WRC runner-up. “There are nevertheless some positives I can take away. This morning, I was a little nervous. But this afternoon, I had good pace on the sections where the grip was consistent. It could have been worse and I think I still have a chance of a podium finish.”

“We threw ourselves into a real Monte-Carlo,” concluded Yves Matton, Citroën Racing Team Principal. “Each of the special stages in the Ardèche loop needed a specific tyre configuration and so we had to compromise. It would have been somewhat premature to draw any conclusions after the first loop and we can now assert that we had a good day, especially if we take the limited use of our quota of extra-soft tyres into account. Mikko had a minor impact which cost him some time, but he remains in contention for a spot on the podium. We are only at the beginning and there are still several tricky parts to negotiate, especially on Friday.”

The two Citroën DS3 WRCs prepared by Citroën Racing Technologies had to drop out of the race at the end of this first day of racing. After making a promising start to the day, notably with the fifth best time on SS3, Thierry Neuville and Nicolas Gilsoul had a collision on SS4. With part of their front right-hand axle broken, the Citroën Junior World Rally Team driver pairing couldn’t make it to the Valence service park. The fourth stage also proved fatal for the driver pairing of Peter Van Merksteijn and Eddy Chevaillier, after they went off. As the Rally 2 (formerly known as SupeRally) is not permitted at this Rallye Monte-Carlo, both driver pairings have been forced to retire from the rally altogether.