Ogier impresses the fans despite accident on the “Monte” 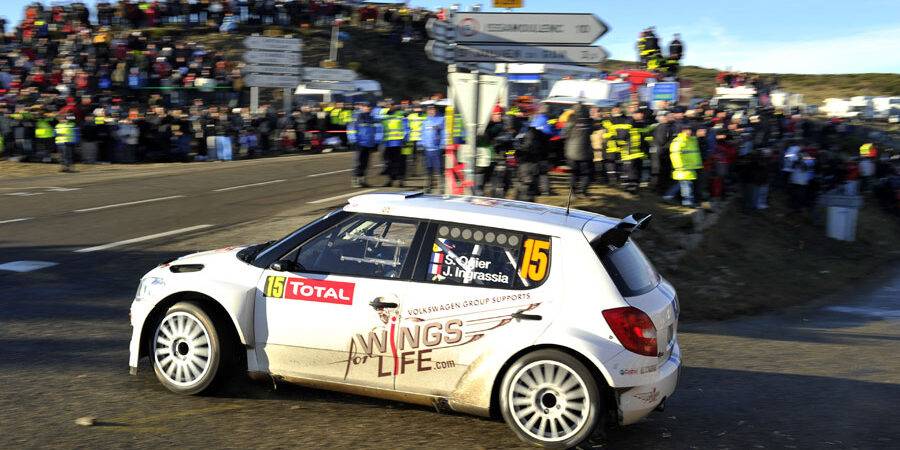 Sébastien Ogier (28) and co-driver Julien Ingrassia (32) made a storming start to their first rally event for Volkswagen, the 80th Rally Monte Carlo, before they retired on the tenth special stage following a spectacular accident. After a precautionary check at the ‘Centre Hospitalier de Valence’ the two were able to leave the hospital on Thursday evening. After the final stage on Friday afternoon the rally armada will move from Valence to Monaco where it will be stationed up to the finish on Sunday.

The Škoda S2000 left the track at a speed of 160 on the 21.66 kilometre special stage from Lamastre via Gilhoc to Alboussière. For Ogier and Ingrassia the accident rather unluckily meant an early end to the legendary rally classic. Beforehand the two had put in an impressive display in their less powerful S2000 Škoda against the WRC cars. Together with his co-driver the new Volkswagen factory driver even held fourth position on occasion in the overall standings.

“That was the biggest accident of my career. We were lucky that it wasn’t worse,” explained Ogier after the accident. “I really felt at home in the car. Our speed was very good. The difficult conditions were perfect for us, as we could almost keep pace with the WRC category.”

Co-driver Ingrassia added: “We tried to cut the corner slightly at the point, the car was launched upwards as a result and at such a high speed we had no chance of keeping the car under control. I bruised my arm slightly on the impact, but luckily nothing appears to be broken.”

“To begin with we are extremely happy that Sébastien and Julien are in good health,” said Volkswagen Motorsport Director Kris Nissen. “Obviously it’s a great shame that the two will be unable to celebrate reaching the finish in Monaco, especially as Sébastien had driven incredibly well up to that point. His speed was amazing on the opening stages. This proves that we have signed in Ogier a driver with great potential. We look forward to the other rallies with these two.”

In addition to Ogier, the Volkswagen factory team also competes in the ‘Monte’ with Kevin Abbring who celebrates his 23rd birthday today. The Dutchman contested the Rally Great Britain in 2011 together with his Belgian co-driver Lara Vanneste (21) and took victory for Volkswagen in the S2000 class. Before arriving in Monaco and the final stages on Saturday and Sunday the young duo currently hold an excellent twelfth place overall and are second-best S2000 class car.

In 2012 Volkswagen contests the entire World Rally Championship in the smaller S2000 class with two Fabia S2000 cars from the group brand Škoda. The rallies act as preparation for the 2013 season in which Volkswagen will compete with the Polo R WRC in rallying’s top-flight.