Class victory for Abbring and Volkswagen in Monte Carlo 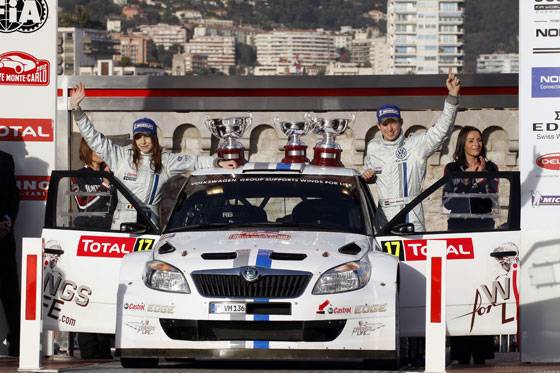 Volkswagen finished first rally of the new season by claiming victory in S2000 class thanks to well paced drive by young Dutchman Kevin Abbring and co-driver Lara Vanneste in one of the two Škoda Fabias, entered by German manufacturer. Other car, driven by Sebastien Ogier and Julien Ingrassia, crashed during 2nd leg of the rally.

Volkswagen Junior Kevin Abbring (23) and his co-driver Lara Vanneste (21) produced a fantastic performance on their way to taking victory in the S2000 class for Volkswagen in the 80th Rally Monte Carlo. The rally classic in the principality on the Cote d’Azur is part of the FIA World Championship for the first time since 2008.

Kevin Abbring and Lara Vanneste were awarded the winner’s trophy in the square overshadowed by the Royal Palace in Monaco after a total of 1772 kilometres and 18 demanding special stages, which included the infamous run to Col de Turini. For the young Dutchman and his Belgian co-driver it is the second S2000 class victory after taking the spoils at the Rally Great Britain in November 2011. At the same time Abbring, who celebrated his 23rd birthday in the cockpit on Friday, gave himself his favourite present. “I’m delighted. To win the ‘Monte’ is simply an indescribable feeling. Lara and I are very proud,” beamed Abbring during the victory ceremony at the Royal Palace. “We improved from stage to stage and implemented the team’s instructions. My heartfelt thanks to the entire Volkswagen team for the support, we worked perfectly together.”

“A big complement to our driver teams and the entire team because in rallying a win is always a win for the complete team,” emphasised a satisfied Volkswagen Motorsport Director Kris Nissen (51). “Kevin put in a fantastic performance, we are proud of him and his co-driver Lara. He impressively demonstrated what a huge talent he is and why we support him as Volkswagen Junior.”

New Volkswagen factory driver Sébastien Ogier (28) and co-driver Julien Ingrassia (32) had already attracted a great deal of attention beforehand. The two Frenchmen held fourth place overall on occasion in the less powerful S2000 car – before an accident meant an early end for the two. Nissen: “Sébastiens Speed was incredible on the opening stages. This proves that we have signed a driver with great potential. I’m convinced that he’ll be good for one or the other big surprise during the World Championship rallies this year.”

The Frenchman also looks forward optimistically to his next outing during the Rally Sweden (9 to 12 February). “I feel very comfortable on the car and team. We were extremely competitive before the accident,” said Ogier, who was third in the WRC in 2011. “The difficult conditions at the start of the rally were an advantage for us because the difference in power between the Fabia S2000 and the WRC class didn’t have such a big effect. We aim to maintain our pace in Sweden and I’m confident that we will also be fast there.”

In 2012 Volkswagen contests rounds of the World Rally Championship with two Fabia S2000 cars from the group brand Škoda. The rallies act as preparation for the 2013 season in which Volkswagen will compete with the Polo R WRC in rallying’s top-flight.