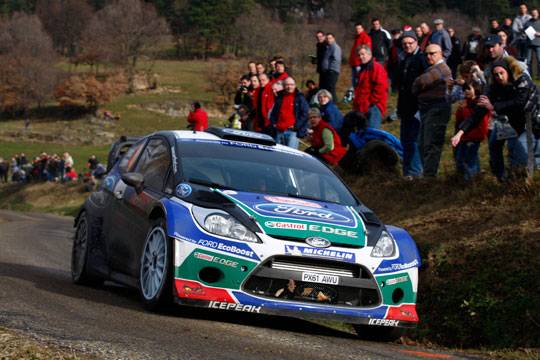 Petter Solberg’s performance in Monte Carlo was one of the highlights of 80th edition of this unique rally. Norwegian returned to Ford and full factory drive after several seasons as privateer, and although he is expected to play second violin to Jari-Matti Latvala, he took full control of his position and claimed some strong victories over the course of Rallye Monte Carlo. In the end, Solberg ended up on podium, personal best for him on this event.

“Petter’s experience has shone through as he has delivered a superb performance.  The car has been 100 per cent faultless throughout the rally, and Petter has been really happy with it and has settled into the team very well. “To leave here with his best-ever Monte-Carlo result is a great platform to build upon over the rest of the year,” Wilson continued.  “This has given us a lot of confidence going forward.  We had the fastest driver on this rally with Jari-Matti leading early on and Petter has done a great job, so looking to the future we know we’ve got a really strong team. We have a test before Sweden, and I’m confident we’ll come away with another positive result next month.”

Ford of Europe motorsport chief Gerard Quinn was delighted with Solberg’s drive.  “This has been an extremely challenging start to the 2012 season, considering we’ve covered 433 stage kilometres over the last five days.  We’re thrilled for Petter and Chris finishing on the podium on their first outing in the Fiesta RS WRC. There was obviously disappointment with Jari-Matti going out of the rally so early on, but from the pace he showed, I’m confident it’s going to be an exciting season for the Ford World Rally Team,” he said.

To quote Red Bull Racing’s Mark Webber’s one liner, which he used after besting team’s number one driver Sebastian Vettel, we will conclude with: “Not bad for number two, eh?”