Ford targets six of the best at Scandinavian snowfest 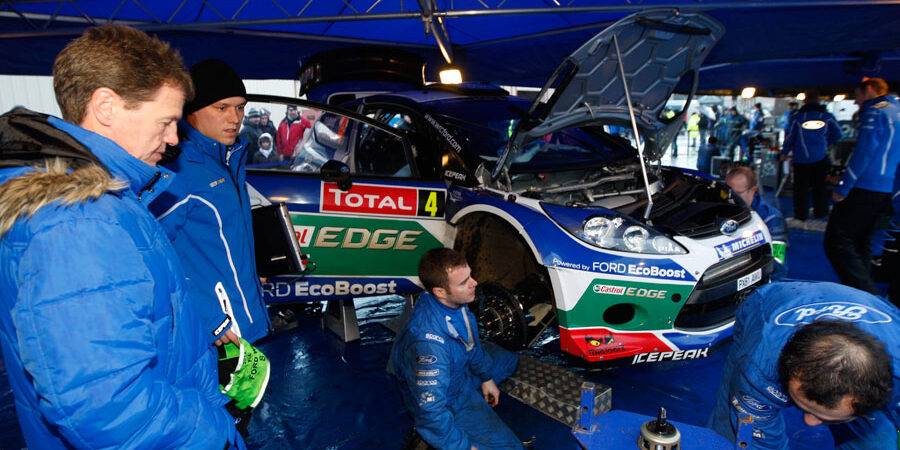 Ford World Rally Team’s Nordic drivers will aim to extend the squad’s winning grip at the Swedish Rally (9 – 12 February) next week.  The team has won the last five fixtures of the FIA World Rally Championship’s only true winter encounter and both Finland’s Jari-Matti Latvala and Norway’s Petter Solberg have Swedish victories to their names.

Latvala and co-driver Miikka Anttila claimed their maiden WRC victory at the Karlstad-based rally in 2008 and Solberg, now partnered by Chris Patterson, took the spoils in 2005.  The Ford Fiesta RS World Rally Car that the two pairings will campaign also has a strong history in Sweden, having mastered the snow and ice to claim a podium clean sweep on its debut last season.

This year’s rally spans both Sweden and Norway and temperatures in the barren countryside can plunge towards -30ºC, placing huge demands on man and machine.  Keeping the Fiesta RS WRCs at peak performance in such unrelenting cold demands specific engineering solutions, while the only way for mechanics to work outside in such conditions is to pile on layer after layer of clothing.

But for the drivers, a winter wonderland where studded tyres, anti-glare sunglasses and heated driving boots are ‘de rigueur’, brings great anticipation.

Hundreds of tungsten-tipped steel studs protrude from each of Michelin’s winter tyres to bite into the frozen road surface.  They provide amazing grip and, paradoxically, Rally Sweden is one of the championship’s fastest rounds.  Drivers also ‘lean’ their cars against the solid snow banks that line the forest roads to help guide them around corners.

Latvala, who finished third in 2010 and 2011 to add to his 2008 victory, has his sights set on another podium.  “That’s my target.  I was happy after the first day of my pre-event test.  I concentrated on perfecting the car set-up, and that’s now clear in my head.  I was a little too aggressive with the settings last year so I’ve modified them slightly,” he said.

“Driving on snow at such high speed is an incredible feeling.  The driving style is more sideways than on gravel, using the throttle to pull the car straight again.  It helps provide more lateral grip because when the car is at an angle and leaning, the traction is better.

“On pure ice the studs provide such good grip that the braking points are later than on gravel.  That only changes when there is loose snow on the surface, which provides the same effect as driving on a rain-soaked road.  The car ‘snow-planes’ and you must brake sooner,” he added.

Solberg, who claimed a podium on his team debut at Rallye Monte-Carlo last month, has huge experience of the rally, with 12 previous starts to his credit.  The 37-year-old has a family home and hotel alongside Friday morning’s Mitandersfors speed test, just inside Sweden, and can rely on extra support both there and in his native Norway.

“The farmhouse overlooks the special stage,” he said.  “I can stand at the door and see the road.  I think there will be many people and TV crews there so the atmosphere should be great.  At least I know the road well!  The conditions are looking good for a fast, proper winter event.  It’s fun to drive in such conditions and as the rally goes into Norway this year, it makes it even more special for me.

“This will be my first loose surface rally in a Fiesta RS WRC.  I have only two days of testing in which to get used to it on snow and ice, but I’m not worried.  Asphalt was the surface on which I expected difficulties in settling into the car, but I felt comfortable immediately at Rallye Monte-Carlo.  Ford has a superb recent record in this rally and Jari-Matti and I want to extend that,” added Solberg.

Rally Sweden ushers in a new qualifying procedure to the WRC.  After two hours of free practice on Thursday morning, drivers will tackle one timed run over the same stage.  They will then choose their preferred start position for the first leg, with the quickest qualifier having first choice ahead of the next fastest and so on.

“It’s a great idea,” said Solberg.  “Every driver has the possibility to earn the start position they want with a good performance in qualifying.  It also provides another opportunity for the media to talk about the rally in the build-up to the start.”

* Regulations limit the team to just one tyre from partner Michelin.  The X-Ice North will be equipped with 380 studs to provide maximum ‘bite’ in the snow and ice.  Each stud is 20mm long and 4g in weight.  However, just 7mm are exposed, with 13mm inserted into the tyre to provide a strong anchor.

* The Ford squad will complete a four-day test at Kall in northern Sweden tomorrow (Saturday).  Latvala drove on Wednesday and Thursday, with Solberg taking the wheel for the final two days.

The major change is a full day in Norway during Friday’s opening leg, over roads used during the final running of Rally Norway in 2009.  Otherwise the format is familiar, with the event based in Karlstad, the major service park at Hagfors Airport and stages in the Värmland and Dalarna regions of Sweden.  After Thursday morning’s qualifying test near Hagfors, the rally begins with a super special stage at Karlstad’s trotting track that evening.  The opening leg is the longest and includes six stages in Norway, as well as a test that starts in Sweden before crossing the border to finish in Norway.  A remote service will be held in the Norwegian town of Kongsvinger.  The final two days are based in the Dalarna region near Hagfors, almost all on roads used last year.  The final 4.66km Hagfors Power Stage will offer bonus points for the fastest three drivers.  The finish is in Karlstad’s main square on Sunday afternoon, after 24 stages covering 349.16km in a route of 1842.60km.