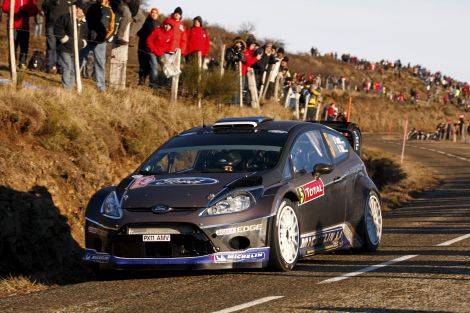 Following an impressive debut for the M-Sport Ford World Rally Team at the WRC’s curtain-raiser in Monte-Carlo last month, the Cumbrian-based team will be looking to continue their recent good form as the Championship heads to Sweden for the second round of the season next week. Ford have an impressive history in Sweden and the M-Sport crews will be looking to build on the successes of last year – when the Ford Fiesta RS WRC claimed a podium clean-sweep in its inaugural rally – to establish themselves as one of the Championship’s regular points scorers.

Based around the Swedish town of Karlstad and covering more than 350 competitive kilometres, the 60th Rally Sweden forms the only snow rally on the 2012 calendar. This year’s edition will see the event span two countries as the crews cross the border into Norway and with two of the Championship’s most celebrated youngsters – Ott Tänak and Evgeny Novikov – returning as nominated drivers, the M-Sport team will be looking for a strong haul of points to maintain their current third place in the manufacturers Championship. Elsewhere, joining the M-Sport squad as a guest driver, Michal Solowow makes a welcome return to the WRC on this the Pole’s 11th WRC start.

It is said that all good drivers can be quick, but that it takes an intelligent and intuitive one to know when to rein in their speed. In a composed return to the Ford Fiesta RS WRC, Tänak proved just that with a mature drive beyond his 24 years on what was only his third outing in the WRC car and his first ever experience of the notoriously challenging stages of Rallye Monte-Carlo last month.

Having contested Rally Sweden on only one previous occasion, the Estonian returns to winter conditions alongside regular co-driver Kuldar Sikk. Eager to prove himself as one of the WRC’s brightest young talents, Tänak will be looking to demonstrate his ability on all surfaces.

Rally Sweden will also present a revised livery for Tänak as the Estonian looks to support the Make Roads Safe campaign coordinated by the FIA Foundation. Launched in 2006, the campaign calls on the international community to take urgent action to stop the daily tragedy of thousands of preventable deaths and injuries on the world’s roads. During the foundation’s ‘Decade of Action’, campaigners will work to ensure that politicians, global institutions, vehicle manufacturers and transport planners put road safety first and M-Sport are delighted to show their support in promoting the initiative.

Evgeny Novikov put in the performance of his career at the season opener in Monte-Carlo last month. On what was his first experience of the challenging roads around the Principality, the Russian set regular top-three times to secure a career best fifth place overall.

Despite contesting Rally Norway in 2009, this will be Novikov’s first experience of the Swedish stages, and with no pre-event testing, the 21 year-old will have to harness all of his talent and composure. Yet considering his incredible performance last month, and with experienced co-driver Denis Giraudet in the navigator’s seat, the young Russian will be eager to replicate his earlier success with another strong finish.

Joining the M-Sport team as a guest driver, Michal Solowow will be relishing the opportunity to get back behind the wheel of a WRC car. Having claimed both the Polish and Central European S2000 championships last year, the Pole will be keen to prove his potential as he makes a welcome return to the world stage.

Having contested Rally Sweden on a number of previous occasions, and with a one day test planned in preparation, Solowow will be well placed as the WRC heads to the region of Värmland next week. Utilising his experience of the stages and conditions, the S2000 driver will be looking to triumph at an event where driving style and confidence behind the wheel are key.

“The feeling ahead of next weekend is good. At the moment I think it is about -30 [˚C] so we should have some really good conditions to show what we can do. I’ve only competed in Sweden once before in 2010, but when the conditions are right, the roads are very nice to drive.

“We’ll have a one day test at the weekend where I can work on getting the feeling and flow of winter driving. This will be my first time on snow for a while and for sure it takes a while to get fully comfortable with the conditions. We’ll look to work on getting a good knowledge of the tyres and getting a good set-up for the rally.

“We should be more comfortable here than we were in Monte-Carlo so it should be easier for us. For sure there are a lot of quick drivers on snow out there so we’ll have to judge where our pace is once the rally starts. But we’ll do our best and drive as best we can.

“It’s important for us to finish so first we need to understand where our pace is. If it’s competitive, then for sure we can try and push.”

“I’m really looking forward to Rally Sweden. I know the weather is very good at the moment – very cold conditions and lots of snow which will make the stages really good to drive.

“I did Rally Norway in 2009, but I’ve never competed in Sweden so these stages are completely new to me. I really enjoy the challenge of driving on snow, but I’ve only driven a snow rally in a WRC car once before!

“We won’t be doing any testing before the rally so it is important for me to get the right feeling in the car and understand the new tyres straight away.

“I’m aiming for the top five again, but for sure it won’t be easy. This is a very difficult rally and there are a lot of very quick drivers, but we’ll work hard to do our very best.”

“It’s a great pleasure to work with Malcolm [Wilson] and the M-Sport team again. I know this rally quite well and I like coming back to these stages. In 2006 we started in a Subaru Impreza WRC which is totally different to the WRC cars of today that are much more similar to the S2000.

“We’ve done 25 rallies in a [Ford] Fiesta S2000, and I have also competed in a Fiesta RRC, so I feel pretty confident with the car. I hope the same will be said for the Fiesta WRC.

“I feel great in the Fiesta S2000. It is perfectly balanced and the suspension is excellent. Every driver expects to be provided with more power and traction in a WRC car, but I can admit that the Fiesta is the best rally car I have driven so far; never failing over 25 events!

“We’ll do some pre-event testing on the Monday just before the rally where we’ll see how the car handles and get familiar with the team. We plan to drive about 100 km which should be good preparation for the rally.

“I’m expecting a really good fight, though I realise we don’t have the same level of experience in the WRC car as some of the other competitors. It’s hard to predict how our pace will compare. We will be competing with top drivers, on the hardest stages in the world and in very demanding conditions. At least 20 competitors have a chance of finishing in the top 3 and a large proportion of them will be looking for the victory.

“We understand the challenge ahead so we will try to do our best and enjoy each stage in the WRC car right up to the finish in Karlstad.”