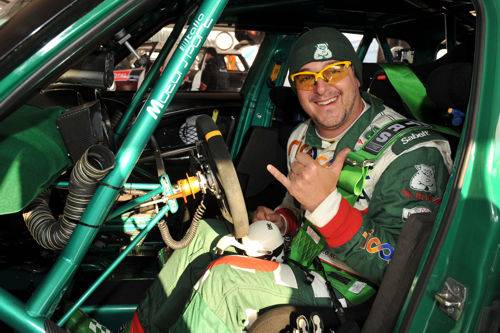 Brazilian WRC debutant and as of yesterday one of BMW Mini’s factory team drivers explained some details regarding his relationship with newly appointed Mini’s “primary” team, Motorsport Italia.

Paulo Nobre and his Portugese teammate Armindo Araujo will take part in all rallies this year under Mini’s official banner, although we are still not completely sure how BMW and Mini plan to promote this team and it’s activities.

For now it seems little will change for both Araujo and Nobre, not even the colours of their cars. As Nobre explained to Brazilian site Cross Brazil, he will get to keep his colours with only minor modifications.

“The coolest thing of all was that the Motorsport Italia respect our contract 100%! We run with our sponsors, and practically with the same layout green and white with red, with everything we have today, including the flag of Palmeiras / Brazil on top! The only change is in some parts of the car to follow the standards of the Mini! All this took me by surprise and I’m not believing a lot of news in such a short time”, Nobre was quoted by Cross Brazil.

Brazilian will visit Swedish stages for the second time after competing on same event two years ago in PWRC specced Mitsubishi Evo.

In other Mini related news it appears Prodrive run squad will feature red, black and white car for Dani Sordo and blue and yellow one for his temporary teammate Patrik Sandell.