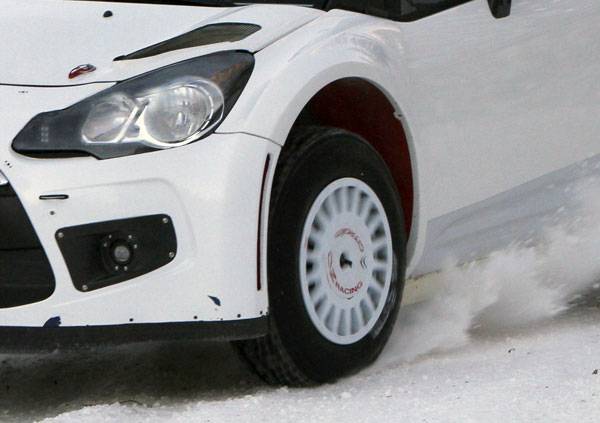 Driving on narrow studded tires on snow is usually compared to driving on gravel with equally suited rubber in terms of grip and speed. But snow covered stages provide another very important element – snowbanks. If they’re high enough they can be used as a soft walls, helping drivers correct their car’s direction without losing too much speed. In fact, snowbanks are essential element of snow rallying and drivers are used to leaning cars onto the banks if they need to shed some speed or correct oversteer.

If latest weather forecasts are to be trusted, drivers and their navigators will have a more challenging task ahead of them this weekend. With no snow over the next few days drivers will have to be extra careful about their tires, with reports of exposed ground patches on some stages as well as tricky icy sections.

But no snow also means no- or close to no snowbanks, and the existing banks will have to be used with caution – if they’re too weak they will just “swallow” the car instead of softly bouncing it back to the road.

Finally, with changeable surface conditions it is expected that frontrunners on stages will be handicapped compared to those starting a bit lower down the order. However, this might prove totally wrong if stages begin to deteriorate quickly it will mean advantage to early starters. Rally Sweden will mark the debut of new Qualifying Stage system, designed to help shape the starting list for individual legs of the rally. With the usual amount of snow this system would probably not be so important in Sweden, but given the lack of white stuff we may just see first exciting application of new concept (and it’s consequences).