World Rally Radio: “Colin and Becs did not want to continue” 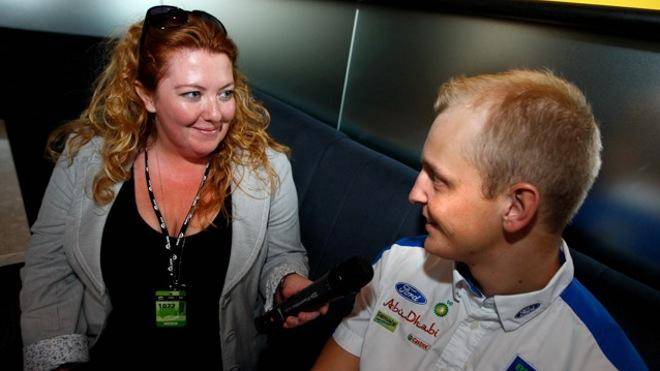 World Rally Radio issued a brief “statement” (what do you call Facebook published releases?) regarding the missing duo of hosts/broadcasters, Becs Williams and Colin Clark and their absence from the show in Sweden.

According to World Rally Radio, Williams and Clark did not want to continue working with WRR after Rallye Monte Carlo and that’s about it from the WRR’s perspective. For true reasons of this unfortunate split we might really need to dig deeper, but seeing the amount of crap (pardon, but it’s true) that’s been flying around the WRC corridors lately we’re kind of reluctant to do so.

On a more happier note, Colin Clark confirmed he will be joining Julien “The Guru” Porter as part of MotorsTV commentary team for Rally Sweden! Regarding the WRR statement, Colin had this to say: “To set the record straight, rallying is my life and there is no way i’d leave the best job in the world without very good reason to do so!!!”

Either way, you can find World Rally Radio’s statement after the infamous MORE link.

A message from World Rally Radio

We’re sorry we have not been able to explain until now why Becs and Colin are no longer broadcasting on the station. Each told us after Monte Carlo that they did not want to continue, and after many years this is sad but understandable. However, we did make strenuous efforts to persuade them to stay, and hoped up to the very last moment that this would still be possible. Sadly, it is not: they are each pursuing their own new challenges, and we thank them both for what they did, and wish them well.

We hope you will welcome the new personnel who join Chris Rawes in bringing World Rally Radio to you. The same interviews, reports, analysis and style, the same minute-by-minute, stage-by-stage coverage from one of the most exciting sports in the world.

That hasn’t changed and won’t, and we hope that you’ll enjoy our coverage from Sweden and the rest of the season.