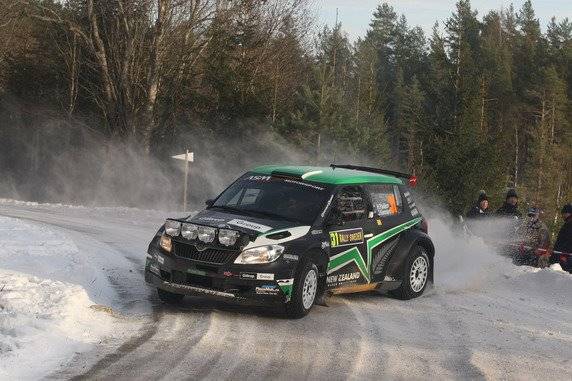 The Kiwi production world rally champion is in Sweden contesting the first round of his 2012 SWRC campaign with co-driver John Kennard.

Frustrated by getting stuck in a snow bank and then suffering a puncture on day one (Friday), Paddon said that he’d had a better day on the second day of the three day rally.

“Definitely a better day today (Saturday),” said the 24-year-old from Geraldine who’s now based in Montgat, Spain near the Spanish team which runs his new Skoda Fabia S2000 rally car. “We had no dramas and have had a clean run while getting more confidence in the car on each stage.”

Saturday’s schedule saw Paddon and Kennard tackle two identical loops of four stages – making eight competitive stages for the day all based around the town of Hagfors which hosts the rally’s service park. There was less snow on Saturday’s stages than in Norway on Friday and with temperatures dipping to only -6ºC, exposed gravel broke through the ice during the afternoon tests.

“Our times this morning had improved, but set-up changes at the midday service went the wrong way which was reflected in our stage times,” said Paddon. Speaking to World Rally Radio, Paddon said: “My confidence with the car and snow is building, but we’re still working on the best set-up.” Later he commented: “With the amount we have already learnt this weekend, we know what areas of the set-up that we need to work on so that I can get more confidence to push. It’s encouraging to have moved up to fourth in the SWRC field and we’ve just got to bring it home to the finish now.”

Sunday’s timetable sees Paddon and Kennard contest six further stages, another set of three stages repeated morning and afternoon, including two runs on the 15.42 km Hagfors power stage on the outskirts of town.

Paddon now holds 23rd position overall. In SWRC – Paddon’s main focus – Proton driver Swede PG Andersson has a lead of 2:58.8 over the UK’s Craig Breen in a Ford Fiesta. Another Swede Pontus Tidemand holds third in a similar Skoda Fabia S2000 to Paddon’s. With a gap of over five minutes to Tidemand, Paddon isn’t presently in a podium position, but as happened on Saturday morning, other competitors can experience problems. Paddon knows to hold steady, with the aim of getting to the finish and maximising his learning on the specialised snow surfaces of the winter rallies.