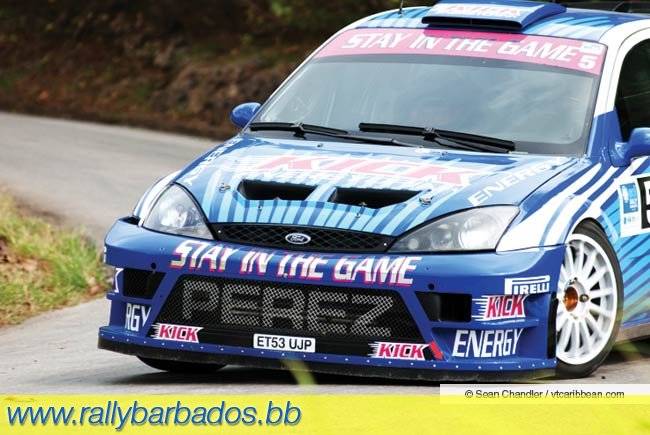 After an outing in the historic category last year, Britain’s Steve Perez will return to the World Rally Car class in Sol Rally Barbados 2012 (June 9/10) in his ex-Marcus Gronholm Kick Energy Drink Ford Focus WRC07 with regular co-driver Paul Spooner on the notes; it will be the third different ex-works Focus he has driven in the island and is the seventh entry received for the event’s M8-WRC classification.

His entry was posted on the event’s official web site, www.rallybarbados.bb, along with those of fellow historic rally enthusiasts Geoff Bell and Andrew Siddall, whom he introduced to the Caribbean’s biggest annual motor sport International event last year; their entries bring to 15 the number of overseas crews confirmed by the Barbados Rally Club (BRC), out of a total of 97 entries so far received (February 17).

Sol RB12 Chairman Barry Gale said: “We were hoping to confirm Steve’s entry off the back of a successful outing on last Saturday’s opening round of the BTRDA Championship, the Team GMF Wyedean Forest Rally, which he won on his last trip there in 2010 . . . but things did not go so well!”

Extreme weather in the UK meant icy conditions for the Wyedean (February 11); of 180 starters, nearly one-third retired, and the surface was such a leveller of power and grip that a crew in a 1400cc Vauxhall Nova finished third overall. As Perez explains: “It was very icy but despite that, I really enjoyed it . . . after all, that’s what rally driving is all about. Like most, we ended up a bank in the first stage but were fastest by 17 seconds on SS2 and I loved it. The puncture on SS3 dropped us back but, when we got yet another puncture on SS4, it ended up breaking the wheel and the half-shaft and, although I tried to continue, it was game over. Not scoring this weekend isn’t ideal and we know we will miss the Dukeries, too.”

There was some consolation for Perez, as the winning Focus WRC07 also carried Kick Energy Drink stickers; it was driven by Charlie Payne, who was seeded at three and co-driven by Craig Thorley, Group N winner with Ryan Champion in RB08. Roger Duckworth, who finished seventh in Sol RB11 in his Subaru Impreza WRC, retired with suspension damage, while Rob and Ross Weir, who will compete in Barbados for the first time this year, successfully continued the shakedown of their new Impreza B13 with a finish in difficult conditions.

Perez will miss the Dukeries because it clashes with Sol RB12, which is his seventh visit to the island’s premier event. After an unsuccessful debut in 2004, when he retired early on day one following an accident in his ex-Hannu Mikkola Audi Quattro Sport, Perez did not return for two years. When he did, his fortunes improved, fourth in his ex-Markko Martin Focus WRC05, a result repeated in RB07, also highest-placed European crew.

Having established a pattern, despite bringing his older Focus WRC03 to Sol RB08, Perez claimed a hat-trick of fourth places; the following year, an early problem left him a long way off the leading pack, so he concentrated on entertainment for the rest of the weekend, throwing the Focus into every corner, much to the delight of the spectators.