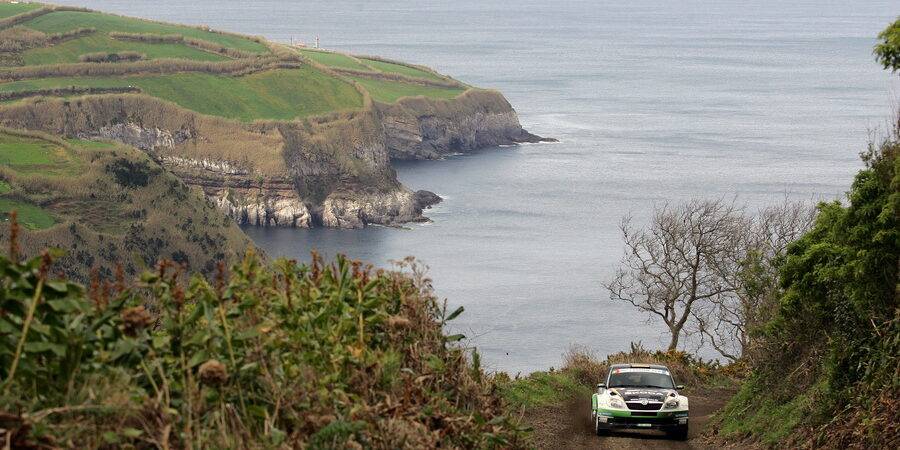 Season six of the Intercontinental Rally Challenge has got off to a thrilling start with Norway’s Andreas Mikkelsen heading Finn Juho Hänninen by a tight margin of 1.4s following the opening three stages of SATA Rallye Açores today (Thursday).

Mikkelsen, the reigning IRC champion, made the best possible start to his IRC title defence by winning the day’s first test despite picking up a front-left puncture nearing the end of the run.

Hänninen, who beat Mikkelsen to victory in the Azores last season, went quickest on the second stage to narrow the ŠKODA UK Motorsport driver’s advantage only for the former downhill skier to hit back by beating Hänninen, in his factory Fabia Super 2000, in their head-to-head battle through the Grupo Marques superspecial stage in front of thousands of enthusiastic fans.

“It’s been a good start and, as expected, we’re having a close battle with Juho,” said Mikkelsen. “We used today to find a good pace that we’re comfortable with, and we’ll continue with that pace tomorrow. With the top five running in reverse order, we’ll start fifth on the road tomorrow so we’ll try to make sure that plays to our advantage. Today was a bit of a warm-up; tomorrow’s a long day and that’s when the proper rally starts.”

Hanninen added: “It was okay, a little slippery in some places today and some fog, but I am happy. For sure, it is going to be a big fight between me and Andreas. He was really speeding today.” Bryan Bouffier is the leading Peugeot driver in third overall, one place ahead of Portugal’s Bruno Magalhães, who is driving a similar 207 S2000 on the event he won in 2010. Frenchman Bouffier suggested he needed to find more speed in order to take the fight to the leading ŠKODA duo, while Magalhães lost precious seconds with a handbrake problem on stage two.

ŠKODA Auto Deutschland’s rising German star Sepp Wiegand is an impressive fifth overall on his IRC debut and his first appearance in the Azores. He is 1.7s ahead of Moura, who reported a throttle problem and a brush with a barrier in the superspecial. But with the top five overall positions reversed for day two, Wiegand now faces the prospect of sweeping the loose-surface gravel for his rivals running behind.

Wiegand’s countryman Hermann Gassner Jr is seventh overnight in his Red Bull-backed Fabia, one place ahead of Dream Team Ukraine’s Oleksandr Saliuk, who is driving an M-Sport Ford Fiesta S2000 on his maiden outing in the IRC.

Rashid Al-Ketbi is a strong ninth for the Skydive Dubai Rally Team with Saliuk’s team-mate Oleksiy Tamrazov completing the top 10, just ahead of Romania’s Marco Tempestini in a Subaru Impreza R4 STI.

Friday’s action consists of 82.85 kilometres of competitive action and gets underway with the first of six stages at 10:20hrs local time. Go to www.ircseries.com for details of Eurosport’s dramatic television coverage, latest results, videos, photographs and regular news updates.