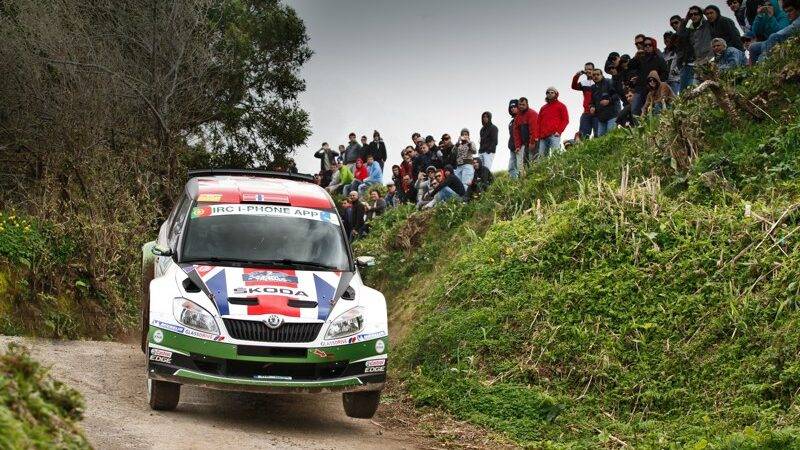 ŠKODA UK Motorsport’s Andreas Mikkelsen has made the perfect start to the defence of his Intercontinental Rally Challenge drivers’ title by leading the opening round of the 2012 series, the Sata Rallye Açores, at the end of Leg 1.

Co-driven by Ola Fløene, Andreas set fastest time in his factory-prepared Fabia S2000 on two of the day’s three stages, with Juho Hänninen (ŠKODA Motorsport) making it a ŠKODA whitewash with another fastest time. The two ŠKODA drivers are already 21.6 seconds ahead of the rest of the field, after only 16.54 miles (26.63kms) of competition.

The road conditions were considerably different to last summer’s event, as a wet winter had made the roads very slippery. Andreas collected a front left puncture on the opening Coroa de Mata (5.12 miles/8.25kms), but still set the fastest time to lead Hänninen by 3.2 seconds. Hänninen regained two seconds with fastest time on SS2, São Bras/Vila Franca, which had been shorted from 10.05 miles (16.18kms) to 4.02 miles (6.48kms).

Andreas and Hänninen then went head-to-head on the Grupo Marques super-special (1.36 mile/2.2kms), with the ŠKODA UK Motorsport driver winning by just 0.2 seconds – ensuring he finished Leg 1 in a 1.4 second lead.

Andreas: “It’s been a good start to Rally Azores and, as expected, we’re having a close battle with Juho [Hänninen]. We used today to find a good pace that we’re comfortable with and we’ll continue with that pace tomorrow. With the top five running in reverse order, we’ll start fifth on the road tomorrow and try to make sure that plays to our advantage. Today was a bit of a warm-up; tomorrow’s a long day and that’s when the proper rally starts.”

Tomorrow’s Leg 2 starts at 09.30 and contains six stages, including two runs over the event’s signature Sete Cidades stage, which runs around the rim of an extinct volcano. Evening flex-service brings the day to an end after 51.48 miles (82.85kms) of action.

Eurosport will broadcast edited highlights of the event, so please check TV listings for details.