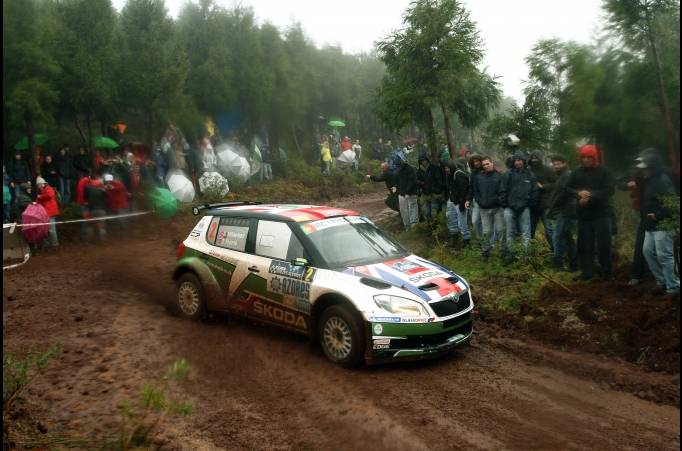 Andreas Mikkelsen will start the final day of SATA Rallye Açores with a strong chance of getting the defence of his Intercontinental Rally Challenge title off to a winning start on the demanding gravel event in the mid-Atlantic.

Driving a ŠKODA UK Motorsport Fabia Super 2000, Mikkelsen began Friday’s route with a slender 1.4s margin over Juho Hänninen, IRC champion in 2010 and the winner in the Azores last season.

That advantage grew to more than 13s when the Finn made a rare error on stage five and spun his factory Fabia in slippery conditions on a downhill section.

Although Hänninen salvaged some pride by winning the event’s seventh stage, he faces the prospect of trying to cancel a deficit of 16.2s to Norwegian Mikkelsen on Saturday’s closing quintet of stages.

“There was heavy rain overnight and it made the conditions very tricky today,” said Mikkelsen. “We were pushing quite hard, trying not to make any mistakes. I want to win this rally, that’s why I am here.”

Hänninen has conceded that his only chance of bagging a ninth IRC career victory will be to attack hard on the final day. “I tried but I couldn’t take more time out of Andreas after my spin,” said the factory ŠKODA driver. “Tomorrow is still a long day and I have to try, I have no other option but to attack.”

Bryan Bouffier had been embroiled in a close fight for third with fellow Peugeot 207 S2000 driver Bruno Magalhães until the Portuguese rolled into retirement on stage six, fortunately without injury to he nor co-driver Carlos Magalhães. Left with a comfortable margin over his pursuers, Bouffier has opted for a more cautious approach in his efforts to begin IRC season six with a podium finish.

Red Bull ŠKODA driver Hermann Gassner Jr heads the battle of the young German aces in fourth overall following a strong run through Friday’s final test where Wiegand faltered by stalling his ŠKODA Auto Deutschland-entered Fabia. Neither has competed in the Azores before, while Wiegand is making his IRC debut.

Multiple Azorean rally champion Ricardo Moura has made the most of his intimate knowledge of the archipelago’s stages – and the changeable weather – to occupy sixth overnight and a commanding lead in the IRC Production Cup aboard his Ralliart Mitsubishi Lancer.

Oleksandr Saliuk, in an M-Sport Ford Fiesta S2000, is upholding Dream Team Ukraine honour in seventh after team-mate Oleksiy Tamrazov crashed his similar car. Sérgio Silva has taken over the mantle of leading Subaru Impreza driver in eighth following Romanian Marco Tempestini’s exit due to a crash on stage seven. Ruben Rodrigues and Rui Lousado are ninth and 10th respectively.

There was early drama in the IRC 2WD Cup when Harry Hunt dropped out of the category lead shortly after the start of Friday’s first stage. The Briton went off the road on a slippery downhill section and damaged his car’s radiator to the extent he was unable to continue. His misfortune has handed Paulo Maciel a clear lead in the category ahead of Ivo Nogueira and French Renault Clio pilot Robert Consani.

Rashid Al-Ketbi’s bid for IRC points on his second ever start in the series ended when he retired his Skydive Dubai Rally Team Fabia with suspension damage on stage five.