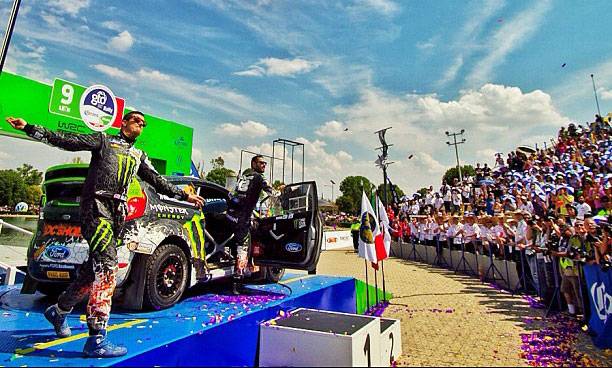 Spirit of Rally award might be gone with it’s former backer Abu Dhabi, but that does not mean rallying community does not recognize special efforts and sportsmanship of everyone involved.

My personal choice for Spirit of the Rally award, or whatever you wish to call it, recipients includes one monstrous driver and one dedicated fan / official.

In driving department I would present this award to Mr. Ken Block, for his decision to pull over and wait for his team mate to go through after Block himself was forced to stop on stage and change damaged wheel on first day of Rally Mexico.

Ken and his co-driver Alex Gelsomino knew Chris Atkinson was closing on them on stage and they decided to pull over and let Atko go instead of bathing him in dust and “destroying” his rally. However, they didn’t know Atko also had a puncture and so the delay took longer than expected. Contrary to those suggesting Block just did what anyone would do if their team mates were in question I can only say I am sure Ken would make the same decision no matter who was coming behind him.

Second award would go to Mr. Xavier McCartan’s official lady driver Christina Everett. Her dedication to this rally and to the task of bringing World Rally Radio stage reporter to last stage of the rally really stands out. Xavier and Christina were on their way to the end of stage 22 when she suddenly went ill and Xav made the right choice and took Christina to hospital. But that didn’t stop her from carrying out her task! After injection and short rest they both went to stage 24!