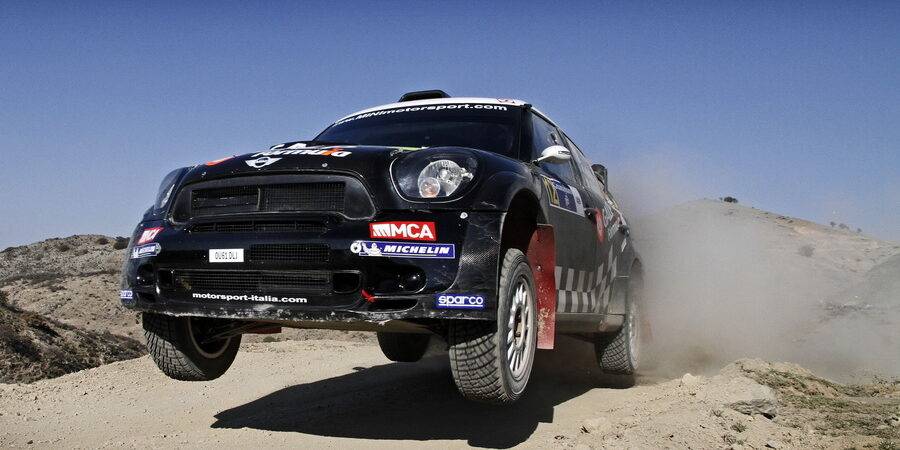 Armindo Araújo (PRT) and his co-driver Miguel Ramalho successfully navigated their Michelin-shod MINI John Cooper Works WRC through the demanding stages of Rally Guanajuato México this weekend representing the Motorsport Italia-run WRC Team MINI Portugal to get their best result to date. After three fierce days of competition the Portuguese pairing finished the event seventh overall, bringing home six drivers’ points in their – and MINI’s – first overseas outing in the FIA World Rally Championship. Araújo’s team mate Paulo Nobre (BRA) once again fulfilled his reputation as the fans’ hero despite having to retire on SS23.

After a Top 10 finish at Rallye Monte-Carlo and a clean pass through every stage at Rally Sweden last month, Araújo was keen to show his speed this weekend and aimed to match his ‘Monte’ result on MINI’s first long haul event. However, Rally México proved to be tougher than expected from the very beginning. Mapping problems jinxed Araújo’s Thursday Qualifying Stage, leaving him first on the roads on Day One. Having to clean the roads for the competition made things difficult but – never to be defeated – the talented Portuguese driver gave everything he had out on the Mexican gravel on Day One, earning himself a well-deserved spot in the Top 10. The cherry on the cake of an already positive day, Araújo set respectively fourth and third overall times in the two runs through Friday’s Super Special Stage.

No longer taxed with the task of road sweeping, Araújo’s aim for Saturday’s stages was focusing on finding his rhythm and the best possible set-up for his MINI JCW. A spin on SS14 – costing him only a few seconds – and ‘moment’ on SS20 when he had to avoid a big rock in the middle of the road, were the only lows in an otherwise trouble-free day. With his confidence back and other drivers falling foul of the tricky conditions, the Portuguese driver was promoted up the field to finish the day in a confortable eighth place overall. With only four stages to go – including the massive 54.3 Guanajuatito stage – Araújo started the last day of Rally México completely focused and eventually finished in seventh place after the unexpected retirement of Jari-Matti Latvala on SS23.

With no previous experience of Rally México, but determined to make the most of the weekend and fail his fans down, Nobre took a steady approach to the event until disaster struck on SS5, the fourth stage of Day One proper, when he rolled his MINI JCW and was forced to retire for the day. With both Nobre and his co-driver Edu Paula unhurt, and thanks to the hard work of the Motorsport Italia boys back in service, the Brazilian duo was able to re-join the event on Saturday under Rally 2 regulations. The San Paulan returned eager to please his fans but unfortunately it wasn’t meant to be – on SS14 he lost the road and one of his MINI’s wheels. Despite having been under the weather throughout the weekend, Nobre resolutely restarted on Day Three, refusing point blank to miss the final stages of the rally or let down the glorious Mexican spectators. The Brazilian’s last day at Rally México started on a high, as he had the honor of going head-to-head with 8-time World Rally Champion Sébastien Loeb on the opening Super Special Stage, marking a new career highlight. However, Paulo’s outing at Rally México ended 3km into SS23, after he went off road causing too much damage to his MINI JCW WRC to continue.

Armindo Araújo: “I’m so happy to have finished in seventh here in Mexico! It’s my best result to date in the WRC and now I can look forward to Rally de Portugal and try and do even better in three weeks time. After Mexico where the fans have been truly incredible, I can’t wait to compete in front of my home crowd.”

Bruno De Pianto, WRC Team MINI Portugal Team Manager: “We’re very excited to have finished the event in seventh overall with our No. 1 driver Armindo Araújo. He did a great job all weekend and he’s done us all very proud! His MINI worked perfectly and now we are all waiting to see what he – and we – can do at Rally de Portugal. As a team manager, it’s a pleasure to work with a driver like Armindo. So far this season, he’s taken on three events in-a-row that he’s never competed on before in a MINI – on Tarmac, snow and gravel. He’s not only successfully completed every single stage, but overcome a problem like having to drive through the Qualifying Stage here without putting in a competitive time, be first out on the tough Mexican gravel and still moved up through the field to finish seventh!”