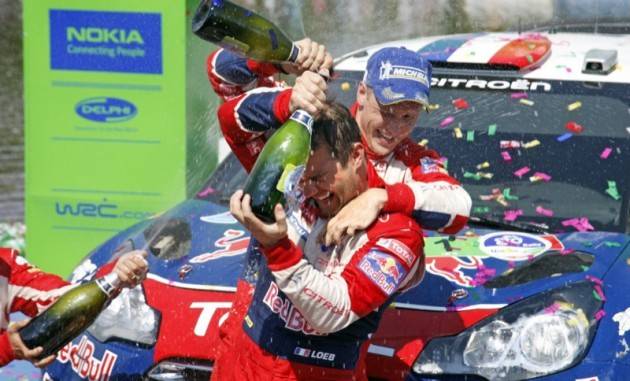 The 2012 Rally Mexico served up intrigue and excitement right to the very end. Sébastien Loeb and Daniel Elena produced yet another heroic performance to claim their 69th career win. Citroën Total World Rally Team enjoyed a clean sweep as second place was secured by Mikko Hirvonen and Jarmo Lehtinen.

Obviously, Loeb and Hirvonen remain first and second in the Drivers’ World Championship standings, whilst Citroën has extended its lead in the Manufacturers’ rankings.

Despite being shorter than the opening two days, the final day of Rally Mexico wasn’t considered to be any easier by the competitors. After tucking into an appetizer with a fourth and final run on the super special stage around the León Autodrome, the crews set off to tackle today’s main course: Guanajuatito and its 54.3 kilometres!

Armed with a comfortable lead in the overall standings, Sébastien Loeb and Mikko Hirvonen didn’t push too hard, preferring to save their tyres for the Power Stage. But the many offs that littered this twenty second stage meant that the Citroën drivers’ approach proved to be right one. Almost despite himself, Mikko Hirvonen set the fastest time, seven tenths ahead of Sébastien Loeb.

On Derramadero, the penultimate stage, Sébastien Loeb added yet another win. The eight-time World Champion then pushed hard on the Power Stage, setting the second fastest time to pick up the two bonus points.

“It really has been a perfect weekend,” enthused Seb on this return to the service park. “I know this 69th win means a lot to Daniel. The rally was very difficult, I had to push really hard to shake off Mikko. Once I’d built up a bit of gap, I was able to control the race a bit more, but I stayed alert nonetheless. There is always a chance of spinning or picking up a puncture, which can ruin a race. This season has started in very typical fashion: a win at Monte-Carlo, an average result in Sweden and a win in Mexico. Let’s hope the rest of the season also goes the same way as in previous years!”

Second again, like in Sweden, Mikko Hirvonen was very pleased with this result: “It’s great for the team to achieve a one-two here. Seb was stronger. He beat me after a good fight, but I had my chances. These three days of racing have helped me to make progress, and little by little I am changing my driving style to adapt to the specific features of the DS3 WRC. It’s been a really good weekend, which augurs well for an interesting season.”

“Our two crews have produced the kind of performances we were hoping they would achieve this weekend,” added Yves Matton, Citroën Racing Team Principal. “The rally was incredible difficult, right to the very end. The perfect reliability of our DS3 WRCs is all the more precious in such conditions, so I’d like to thank the entire Citroën Racing team for the key part they have played in achieving this result. In addition to the two Citroën Total World Rally Team cars, I would also like to emphasize the performances of Nasser Al-Attiyah and Thierry Neuville. Nasser ran an intelligent rally, making good use of his rally-raid experience. Thierry was unlucky, he had to rejoin under Rally 2 rules, but analysis of his performances shows he has clear potential on gravel. He’ll be able to use the experience gained here in the next round at Rally Portugal.”