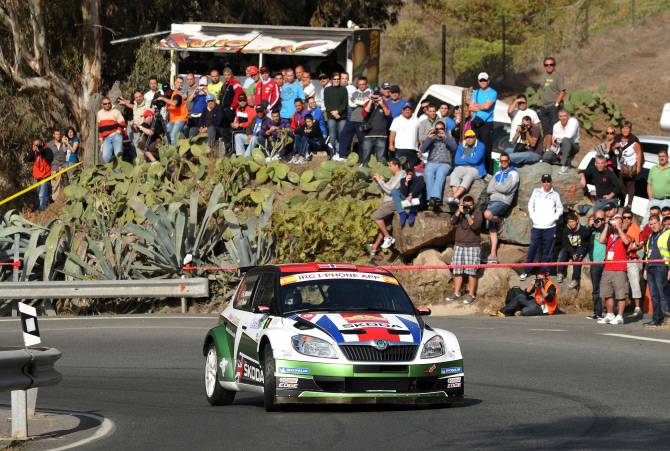 The race for the 2012 Intercontinental Rally Challenge crown is showing no signs of slowing down. Fresh from the thrilling season-opening SATA Rallye Açores last month, crews now head to the island of Gran Canaria for the first asphalt event of the year, Rally Islas Canarias El Corte Inglés.

A counting round of the IRC since 2010, the rally has undergone significant change for this season with an expanded route increasing the overall competitive distance by some 50 kilometres and adding a further three stages to the itinerary.

While the two night stages that provided a huge test in 2011 no longer appear on the schedule, the rally will continue to create a major challenge with six of the 15 stages more than 20 kilometres in length.

In contrast the Gran Canaria stage measures just 1.50 kilometres. The test is based at Gran Canaria’s karting club and proved a big hit with fans last year on its return to the itinerary following several years away. It will be dusk when the stage begins on Friday to signal the end of the opening day’s action.

With the stages frequently climbing and descending, drivers have to pay close attention to the speed they carry and the line they take for each corner to ensure optimal momentum is maintained at all times. That also makes precise car set-up and pacenote accuracy vital.

One of the other notable features of the stages is the abrasive surface, which is partly constructed from volcanic lava. It means grip levels are high and in the event of rain will remain constant, although tyre wear can be at a premium as a result. However, because there is little opportunity to take ‘cuts’ through corners, the road surface remains relatively clean and consistent and the risk of punctures is reduced.

THE BATTLE FOR VICTORY

Defending Intercontinental Rally Challenge champion Andreas Mikkelsen will be among the favourites for first place on Rally Islas Canarias El Corte Inglés. Although his three IRC wins to date have come on gravel-based rallies, the ŠKODA UK Motorsport driver has become a formidable force on Tarmac.

Asphalt is also the surface on which Jan Kopecký excels. After missing out on an Açores’ entry, the Czech ace will be anxious to make up lost ground in the title battle in his ŠKODA Motorsport Fabia.

ŠKODA Auto Deutschland’s Sepp Wiegand shone on his IRC debut in the Açores last month, finishing fourth overall following a close battle with fellow German Fabia driver Hermann Gassner Jr of the Red Bull Team. Both rising talents will be competing in Canarias for the first time. Another ŠKODA driver capable of a strong result is Spanish privateer Alberto Hevia, an event regular.

Oleksandr Saliuk and Oleksii Tamrazov front Dream Team Ukraine’s challenge in their M-Sport Ford Fiesta S200s, while Hungarian Janós Puskádi will start his first IRC event in a Fabia S2000 having impressed in the IRC 2WD Cup in the past. Rashid Al-Ketbi will continue his IRC acclimatisation in this Skydive Dubai Rally Team Fabia on a rare outing on asphalt.

Luis Monzón will combine his role as event promoter with driving a Peugeot 207 S2000. Jonathan Perez will also pilot one of the French machines and will be hoping to build on his starting position of 12th.

Following his dominant class victory on his home event, SATA Rallye Açores, last month Ricardo Moura will be bidding to make it two wins in a row at the wheel of his Ralliart Mitsubishi Lancer. However, Romania’s Marco Tempestini will have other ideas as he bids to make up for his early exit in Açores in his Subaru Impreza R4 STI. Meanwhile, fellow Subaru representative José L Barrios and Lancer pilot Armide Martin both have plenty of event knowledge to call on.

After they both failed to finish the season-opener in Açores, Robert Consani and Harry Hunt will be aiming to bounce back with strong results in Canarias. While Hunt, the 2010 IRC 2WD Cup champion, scored points on the event last season, Consani is a Canarias newcomer. He’s also switching from the Renault Clio he used in Açores to a Renault Mégane RS. Elsewhere, Bulgarian lady driver Ekaterina Stratieva begins her 2012 IRC 2WD Cup campaign in Canarias.