Two Circuit of Ireland marshals to travel to Rally Barbados 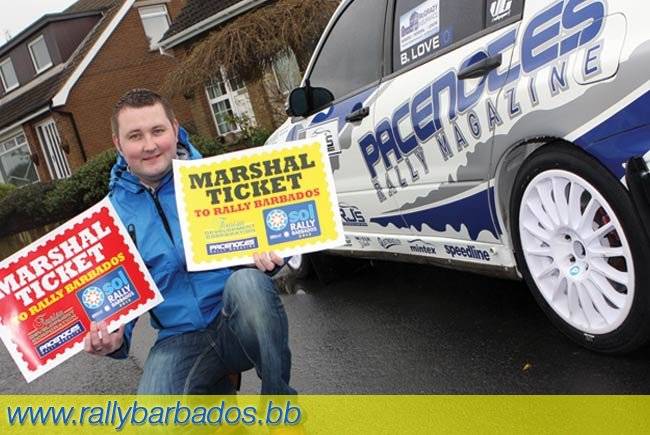 The Barbados Rally Club (BRC) has stepped up its worldwide promotion of Sol Rally Barbados 2012 by joining forces with the Donnelly Group Circuit of Ireland Rally (April 6/7). Two lucky volunteer marshals who work on the Easter weekend event will win an all-expenses-paid return trip across the Atlantic if their names are drawn out of the hat by reigning Intercontinental Rally Challenge (IRC) Champion Andreas Mikkelsen.

The competition, organised in association with the Caribbean island’s private-sector Tourism Development Corporation (TDC) and Ireland’s Pacenotes Rally Magazine, was announced earlier this month at a meeting of Stage Commanders, but only made public this week. It has already been greeted enthusiastically in the mainstream Irish media, also on social media sites such as twitter and Facebook and described as “the best prize in UK and Irish rallying” for marshals.

For the first time ‘the Circuit’, one of the world’s oldest rallies – it first ran in 1931 – is a round of the IRC, promoted and broadcast by Eurosport, and won by Ulsterman Kris Meeke in 2009, the same year in which he claimed his second consecutive victory in Sol Rally Barbados. It is also part of Belfast City Council’s Titanic Festival, marking the Centenary of the launch of what was at the time the world’s largest passenger liner – the event will start on a purpose-built SuperSpecial stage on the site of the Harland & Woolf shipyard where it was built, now known as the Titanic Quarter.

Neil Barnard, the BRC’s PRO, commented: “Over the past two years, in association with the TDC, we have offered prizes to competitors and spectators. This competition is perhaps the most important, though, as we are rewarding those volunteers without whom motor sport simply could not go on, while aligning our event with an exciting new round of the IRC, which looks set to enjoy worldwide focus.

“The spectator competition that we ran in Pacenotes last year was a tremendous success, and certainly helped to further raise the profile of Sol Rally Barbados in that rally-mad country – of the 12 new International crews currently entered this year, five are from Ireland, and we have a total of eight crews with Irish connections on our list.”

Pacenotes publisher Simon Mooney, who travelled to Barbados last year with the spectator prize-winners, added: “From our perspective, we’re delighted to be putting something back into the sport, especially as it is going directly to the people that matter. As we all know, motor sport around the world simply could not function without thousands and thousands of volunteers – in Barbados last year, I found the same infectious enthusiasm and commitment that I have become so familiar with here at home. I’m sure that whoever wins this great prize will not only enjoy themselves, but will find it difficult not to join in while they are there.”

All volunteers and marshals over the age of 17 will automatically be entered into the competition, to be drawn during the post-event Prize-giving by reigning IRC Champion Mikkelsen. The prize trip for two to the Caribbean’s biggest annual motor sport International includes return flights on Virgin Atlantic from London Gatwick, accommodation for 14 nights and rental car for the duration. Manpower Manager for the Circuit of Ireland, Des O’Loan, said: “Sol Rally Barbados is a really great event and I know the two lucky winners will have a super time.”