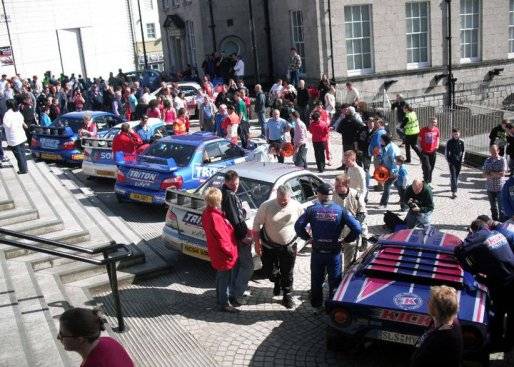 With just over a week to go until the world renowned Intercontinental Rally Challenge (IRC) descends upon Northern Ireland, the 2012 Donnelly Group Circuit of Ireland Rally is giving you the opportunity to put your questions to some of the biggest names in motorsport.

Ahead of the Circuit this Easter Weekend 6/7 April 2012, it has been announced a Rally Forum will take place in the Armagh City Hotel in the Rally’s host city of Armagh, on Wednesday 4th April, 8pm.

The Rally Forum will be compered by motorsport expert and Sky Sports presenter, Tony Jardine. The Forum provides an unrivalled opportunity for you to meet and greet the greatest Rally superstars and bosses including:

“Armagh is once again the host city of the Rally, which takes place during the Easter Weekend 6/7 April. The Service Park will be located in the Armagh City Hotel, the Armagh Rugby Club and the Armagh Demesne, for the duration of the event making the hotel, the perfect location for our spectators and fans to put their questions to some of the biggest names in global motorsport.

“The 2012 Donnelly Group Circuit of Ireland Rally is the only UK or Ireland event to be included in the IRC this year and with our purpose built Titanic Super Special Stage taking place on Good Friday, the competitors and spectators are in for a real treat. As are the millions of viewers who will be tuning in to Eurosport to catch the IRC stages from the Emerald Isle.

“I’m looking forward to hearing from Skoda UK driver Andreas Mikkelsen in the lead up to the event. As reigning IRC Champion he will have to compete against some of the best Irish talent to defend his title.
“Dungannon’s Kris Meeke is a perfect example of how well our local drivers can do in these global Rally events. He took the title of IRC Champion in 2009.

“Also taking your questions at the Forum will be Gerard Quinn, Malcolm Wilson, Jimmy McRae, Craig Breen and Maurice Hamilton. I would like to thank them all in advance, and of course our celebrity compere Tony Jardine, for getting involved and showing their support for the 2012 Donnelly Group Circuit of Ireland Rally.”

The Rally Forum 4th April, 8pm is taking place in support of the McRae Vision Charity which was set up following the tragic death of 1991 Circuit Champion Colin McRae.

The Belfast Visitor and Convention Bureau (BVCB) will be selling tickets through the Belfast Welcome Centre for Titanic Super Special Stage priced at £12.50 standing, reserved seating £25.00 and VIP tickets £72. Family passes are also available priced £90. Tickets can be purchased online at www.circuitofireland.net or by calling 028 90 246609.

For further information go to www.circuitofireland.net or Facebook Circuit of Ireland Rally.

Who’s who at the 2012 Donnelly Group Circuit of Ireland Rally Forum?

Tony Jardine
Tony has been named as the celebrity compere at the Rally Forum. Tony started his rally career in the Middle East in 1975 before moving in to the Formula One world where his colleagues included Nigel Mansell and Ayrton Senna. Other previous work includes full time pit lane reporter for the BBC and ITV when the F1 coverage switched. Tony is currently working as a Sky Sports presenter.

Malcolm Wilson
Head of M-Sport, Ford World Rally Team. Malcolm Wilson has more than 20 years’ experience of rallying at World Championship level. As a driver he won two British national titles in the late 1970s and achieved a long-held ambition by winning the British international crown in 1994, all at the wheel of Ford Escorts.

Maurice Hamilton
Maurice Hamilton was the Observer’s motor racing correspondent between 1990-2010. A published author, Hamilton currently writes F1 columns for publications all over the world and can be heard on BBC Radio Five Live as their F1 summariser.

Kris Meeke
Professional Rally driver born in Dungannon, Northern Ireland. In his early career, Meeke was taken under the wing of the late Colin McRae and contested the British Junior Championship in a Ford Puma. Kris was named Champion of the 2009 IRC in his Peugeot UK backed 207 S2000.

Andreas Mikkelsen
Norwegian born Andreas is the reigning IRC Champion and holds the record for the youngest driver to win a British national rally. Andreas signed to drive for Škoda UK Motorsport ahead of his first full attempt at the Intercontinental Rally Challenge in 2011. In addition to becoming IRC champion, Andreas also won the Italian Gravel Championship (Trofeo Rally Terra) after winning the Rally Adriatico, Rally San Marino and the Azzano Rally in a ŠKODA Rally Team Italia Fabia S2000. In 2012, Andreas will attempt to defend his Intercontinental Rally Challenge title in a ŠKODA UK Motorsport Fabia S2000, co-driven by Ola Fløene.

Craig Breen
The 22-year-old Waterford driver is the current World Rally Championship Academy champion, winning his first event at the 2011 Rallye Deutschland and sealing the championship with a win at Wales Rally GB. Craig will be taking part in this year’s Circuit of Ireland.

Jimmy McRae
Needs no introduction to Rally fans – the Scot has won the Circuit of Ireland a record seven times. He was also highly successful in the British Rally Championship, winning the title five times in 1981, 1982, 1984, 1987 and 1988. He remains one of the most popular faces in world rallying.