As the years go by and various sponsors and investors come and go, cars and teams change their colours and liveries to accomodate new money-bringers. In this constant change some teams are big and powerful enough to keep their colours more or less intact and can aford to get creative while others are happy to sell advertising space on cars and couldn’t care less on what the car will look like in the end.

It’s pointless to discuss design of rally cars to some extent, but on the other hand, I really enjoy seeing cars as not only vehicles or racing tools but also a piece of creative expression both in car body design as well in as colours and paint schemes of the livery.

In the World Rally Championship today we have only a handfull of factory cars with addition of privateer teams, so the choice of different car liveries is not that huge. Red, white and blue of Citroën works well for all sponsors of the French team while blue, white and green suits Ford’s investors as well. Then there is Mini with their traditional red and black combined with chequered flag decals. Ford’s “B team” M-Sport is sporting different colours depeding on driver’s sponsors and Volkswagen is in their working attire, white car with charity branding. But one car and team really stands out when it comes to using paint on cars for even more oomph. You’ve guessed it – it’s Monster World Rally Team and Ken Block & Chris Atkinson.

As with anything else about rally, I like to think not only about modern day WRC, but about the past as well. And that means huge number of superbly designed and instantly recognizable liveries. These are just some of my favourites: Subaru 555
Another symbol! What makes is special is the minimalistic use of colours and decals. Just insanely emotive shade of blue with touch of yellowish gold and some dynamic shapes and that’s about it. Of course, Impreza’s distinctive boxer engine grunting also did it’s part, but golden-blue Subarus marked an era just like Lancia did in it’s days.

Škoda Motorsport
From the days of humble Favorit and it’s exploits in Formula 2 (or was it 2000?) category to today’s all-conquering Fabia S2000, Škoda always took care about the looks of their cars, even if they were just 1300 ccm FWD Favorits surrounded by Lancias, Fords and other major brands. Green, red and white is Škoda for you. 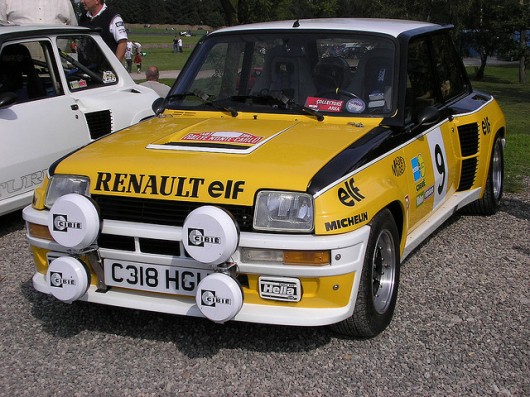 Renault Elf
Yellow and black in nature usually means danger – if you don’t agree go pet a wasp or a hornet and see what they think of it. Renault’s rally uniform at one point was exactly that – yellow and black with some white details. And no wonder it worked well – the feisty little Renault 5 Turbo was insane machine, a true “insect with a sting”.

Go Fast! Ford
Well, livery looked nice and team was promising before the start of 2012 season, but now they’re lost in some kind of financial limbo, with very little news and even less outings. I guess they just did their thing and, well, went (out) fast.

There are so many more great liveries out there as well, but it would take just too damn long to list them all out – this tiny “list” is just a fraction of those I find great or impressive. Rothmans Opel, Audi’s yellow-turned-gray accents, Peugeot WRC evolutions, Fiat’s Alitalia, Toyota’s Castrol “snakes”…