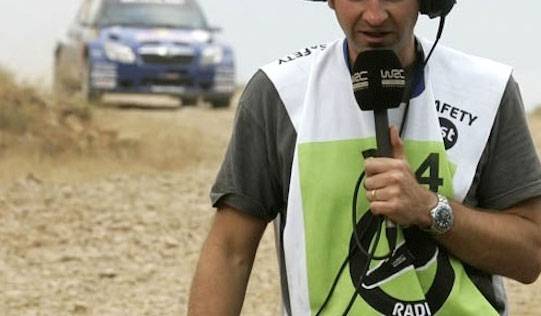 Today I woke up rather late. I had to get up pretty early for previous two days due to doctor’s appointment and some other things, so I treated myself with a longer nap today. And what’s the first thing I saw after grabbing my coffee and opening up Twitter? Colin Clark and Becs Williams are back on air!

As the thought sank in I was begining to wonder how on earth did this happen. Admittedly, I don’t know much about the original drama and Becs and Col leaving the World Rally Radio, but I know a thing or two. In short, I didn’t think it would be possible for Becs and Colin to return to World Rally Radio all of a sudden. So what was going on?

I scrolled through tweets up and down (because officially you will learn absolutely nothing these days, from the original break-up to the Mini drama, Eurosport discussions, it’s all shrouded in mystery and secrecy) trying to find more information about former World Rally Radio hosts reuniting with their crew. Found nothing.

Then, all of a sudden and by pure coincidence, I had two rally radio broadcasts opened. One on World Rally Radio’s website and the other on WRC.com’s newly established radio stream. It was only yesterday that WRC.com used World Rally Radio as main radio provider, but today brought the big change. So here I am, sitting in front of my PC, hand holding a coffee cup mid air, looking at the screen and listening to two different rally radio streams! Did I finally lose it?

Apparently not. Apparently that’s exaclty what happened. We still don’t have global promoter (it’s OK, it’s not like season is under way, right?), we have couple of manufacturers and few privateer teams, we have stages that need watering, and now we have two rally radios, double stereo. If you’re female you’re lucky – you can multitask and listen to both streams!

Are we going to see epic fistfights on stage ends as the reporters of two different radio stations elbow their way to speak to the drivers? Will microphones be used to probe sensitive body parts in an effort to destroy that other guy’s radio broadcast? Will drivers tell one thing to one reporter than change their story for another? So many possibilities!

Seriously, I don’t give a tiniest bit of you know what for all the politics and dramas and all that crap that’s been poisoning this season from day 1. It’s just the reflection of overall state of the World Rally Championship. I enjoyed both radios, and both teams had their good sides and their bad sides, but the people we listen(ed) to are just doing their job. Or at least I hope so.

But these overnight changes are just sickening and whenever something like this happens (Mini, Eurosport, original World Rally Radio breakup, etc.) I cannot help but fear there is entire underworld of murky and muddy politics living in the sewers of WRC, feeding on personal and financial interests with zero regards to the sport and future of WRC.

Perhaps I’m wrong, perhaps everything is peachy and everyone is friends, and WRC is actually going through it’s golden years right now. But I only speak from what I see and know. And what I do see is not making my WRC loving soul happy.

But, let’s not be all gloom and doom. We have a rally at hand and stages to enjoy. Let the rally begin! Commence the watering!