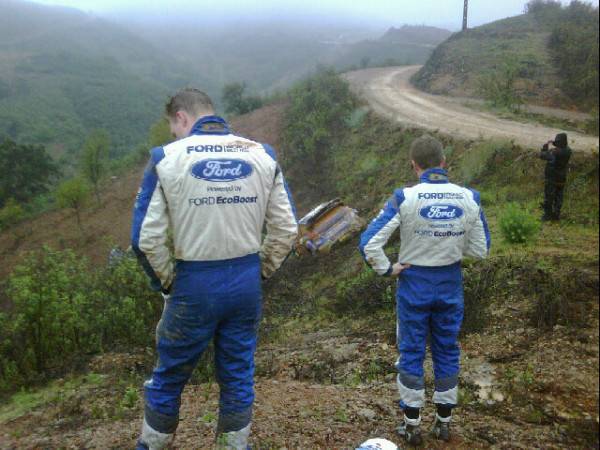 2012 really was shaped to be The Year for Jari-Matti Latvala – he got promoted to number 1 status in Ford and with new and experienced team mate Petter Solberg, Latvala was expected to shine and show maturity, speed and ability to bring home victories, or even more important, points.

But, we all know what happened to that shiny plan. Talented Finn crashed out on three out of four rallies, yet winning that remaining one, so it is still a lot of big ups and downs for Jari-Matti. When he pulls all the right strings, he is very hard to catch, but the way 2012 is going for him, it seems those strings are hard to manage.

One could even say his results are pretty binary! He is either right there at the top, or crawling out of his crashed car.

Latest retirement in Portugal was especially painful, because it happened right after Sebastien Loeb crashed and handed out double victory to Ford guys. Nobody was surprised by emotional reaction from Latvala, and his comments spoken right after the crash. “Perhaps I should not be doing this, maybe I should be thinking of doing something else in my life”, Latvala said to Julian Porter at the scene of his crash in Portugal.

Fully aware of all the drama and disappointment within the Ford and around the WRC community, Latvala then went one step further and apparently asked Ford’s “chief” Malcolm Wilson to be released from number 1 status within the team.

“Jari did actually offer [to step down as number one],” said Wilson. “He said he accepted that maybe the time had come [for a change of tactic]. But the way out of this is to give him as much support as I possibly can – and that’s what I intend to do. For me, he’s the only driver in a straight fight who can take the fight to Sebastien and beat him. And, for us to win championships, we have to win rallies.”

I cannot recall any similar case of a driver being so obviously talented, fast and hungry for success and yet so out of luck and basic sense of survival instincts! I’m not sure if Latvala should seek some advice from one of the veteran drivers or co-drivers, because he obviously just needs some little, but all important, tweaks to finally unlock that winning concept of speed and durability. One thing is sure, though, Latvala’s place is in the WRC – I hate the very idea of losing such talented and inspiring driver only because he was not able to fine tune his racing instincts.