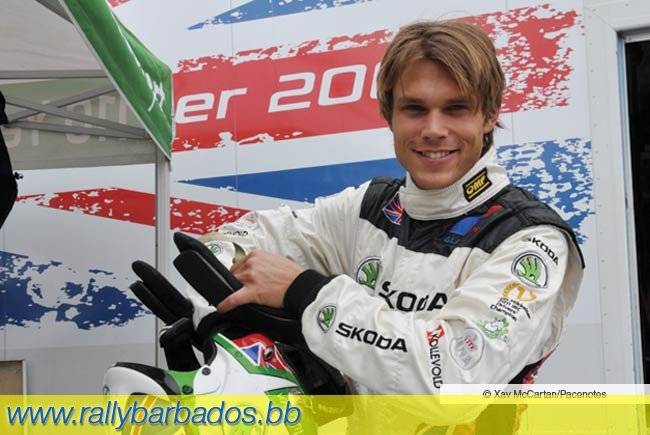 Sol Rally Barbados 2012 (June 9/10) enjoyed a major presence over the Easter weekend at the Donnelly Group Circuit of Ireland Rally. One of the world’s oldest rallies – it dates back to 1931 – it was, for the first time, a round of the Intercontinental Rally Challenge (IRC), which is promoted and broadcast by Eurosport.

Reigning IRC Champion Andreas Mikkelsen took time out of his busy schedule to draw the names of two lucky volunteer marshals out of the hat; their names will be revealed next week, once everything is in place for their all-expenses-paid return trip across the Atlantic to see Sol RB12 first-hand.

The prize draw was organised in association with the Caribbean island’s Tourism Development Corporation (TDC) and Ireland’s Pacenotes Rally Magazine. It was the final component of the European promotion of Sol RB12, which has resulted in a record-breaking International entry, including 10 crews from Ireland, more than half of whom are newcomers to the Caribbean’s biggest annual motor sport International.

The Zero car also carried Sol RB12 stickers, promoting the event across the whole length the ‘Circuit’; crewed by Barbados regulars Martin Taylor and Peter Gallagher, the Dublin Crystal Proton Satria will now be re-fettled before joining the other European cars at Portsmouth for shipping to Barbados in early May.

The Satria ‘stars’ in the opening sequence of a video which has enjoyed more than 20,000 hits on various internet sites – the first of a number of drivers to slide wide on a slippery downhill left-hander early on day two, Taylor struck and opened a gate through which others passed into a grassy field. As Taylor said afterwards: “Ooops! But I don’t feel too embarrassed, as Andreas Mikkelsen did the same thing a few minutes later!”

For both Taylor and Gallagher, old road-rallying friends from the 1970s, this year is the seventh trip to Barbados. Taylor will have son Eddie as his co-driver for the first time in the island, replacing wife Janet; he says: “Eddie’s on the notes, Janet’s on the beach! It’s become a family occasion now, as it has for so many other competitors.”

Gallagher, who has competed in a variety of Peugeots in recent years, will drive a Talbot Samba in which he won class and overall Group A titles in the Irish National Championship in the mid-1980s. The car has been in storage since 1997 – Gallagher says: “It has been up on axle stands and hadn’t turned a wheel until a recent test day; it is like a time warp machine, unsullied by modern conveniences like ECU and so forth.”

Confirming Taylor’s view of the Caribbean ‘craic’, Gallagher says: “I have had a great time in Barbados, and always look forward to returning to the ‘Jewel of the Caribbean’.”

Mixed fortunes for International crews preparing for the Caribbean

International crews separated by nearly 5,000 miles have met with mixed fortunes over the past week as they prepare for Sol Rally Barbados 2012. Under the good news heading, island regulars Steve Perez and Paul Spooner finished fourth on the Donnelly Group Circuit of Ireland National Rally in the Kick Energy Ford Focus WRC07 that will be shipped to the Caribbean in a few weeks’ time.

After a spin on the Friday night Titanic SuperSpecial stage in the Belfast shipyards where the doomed liner was built, Perez started the rally’s closed-road tarmac stages in 69th place, but climbed back up the order to battle with previous ‘Circuit’ winner Derek McGarrity (MINI WRC). Perez said: “It was good to be challenging the locals for a place on the podium, so it has all been very positive.”

On the other side of the world in Dubai, everything turned very negative for Welsh brothers Gareth and Lloyd Bettinson, who had built a pair of cars specifically to compete in Sol RB12. Having entered on-line in early October – the first newcomers to express their interest – they had worked tirelessly on their Ford Escort MkII and Renault Clio, both finished a few days before Easter.

Their deadline had been an Easter Sunday sailing from Jebel Ali, a port just south of Dubai, on a freighter that would have delivered their cars direct to the Bridgetown Port in Barbados after 40 days at sea . . . but the voyage was cancelled. Gareth said: “We are both extremely disappointed; we have explored every possible avenue of getting the cars to Barbados and it just isn’t going to happen. We will definitely be there in 2013.”

Sol Rally Barbados and Shell V-Power King of the Hill are organised and promoted by the Barbados Rally Club, which celebrated its 50th Anniversary in 2007; Sol RB12 is the 23rd running of the Club’s annual International All-Stage Rally and marks the fifth year of title sponsorship by the Sol Group, the Caribbean’s largest independent oil company.