Interview: Colin McMaster (aka the Mc in McKlein)

Some people are born to be world famous rally drivers, fearless, brave and bloody fast in whichever environment you put them in. Others are born to be fans of rallying, dedicated bunch of people, never complaining, and always ready to cheer for every crew. And then there is a special group of passionate and creative people, selected to document the excitements and emotions of this amazing form of motorsport.

Colin McMaster’s name is one of the trademarks in the World Rally Championship. “The Mc in McKlein” photographic agency, established in co-operation with another legendary piece of WRC “furniture”, Reinhard Klein. Impressive photographic portfolio and undeniable passion for anything and everything rally make Colin one of the people I always wanted to ask a few questions. As it turns out, he can talk (or in this case write) as well as snap breathtaking images, thus destroying the age old myth about photographers being only able to speak through their photos.

I must admit here that Colin McMaster’s line of work is something I’ve been dreaming about for years and years, yet it somehow just didn’t turn out to be. No matter, with rally people such as Mr. McMaster being as friendly and easy to approach, I am happy to just be able to talk to them and in a way get behind the scenes of the WRC. And while there were so many other questions that I would like to see in this interview, I hope the ones finally selected will be interesting to you. Sadly, this interview was done via e-mail, but hopefully some day I can redo this the proper face-to-face way – I am pretty sure there is so much more to talk about.

Finally, huge thanks to Colin for taking time to answer these – if… no… when I make it to some of the future WRC rounds, beer is on me!

Let’s take it from the start. How did you get into the business and was it photography that got you involved in rallying or was it the other way around?

Photography 1st, 2nd & 3rd. My 11th birthday present was a camera and that’s what ignited a passion. All through my teens I would take with my camera everywhere I went, mainly documenting what my family did but also some sports that I would go to. I played a lot of team sports (football and hockey) and I would take pictures of my friends in action. When I was 15 my family moved to South Africa, which opened my eyes to a whole new vista of landscape photography, there’s nothing quite like an African sunset. I didn’t speak any Afrikaans so at school they had to decide what I should do during the 3 or 4 hours of Afrikaans lessons each week. I convinced them to let me build a darkroom at school so that I could learn more about photography, and it was in the dark where I really learnt the most about photography. Our house was fairly close to the Kyalami racing circuit and I would cycle down there whenever I could to watch the racing cars and, of course, take photos of them. When I was about 18 I’d decided that I could marry my two interests (photography and racing cars)

If you compare the times you were making your first steps in the field of professional motorsport photography with today, do you think it’s easier for newcomers today as opposed to couple of decades ago?

It’s much easier to take some pretty decent pictures with the quality of modern digital stills cameras. It’s harder to get press accreditation today and it’s way harder still to make any money selling pictures. Shooting digital costs a lot less than colour transparencies and technically requires a lot less skill. The artistic vision remains the same though.

In what way (apart from obvious benefits of going digital) is work today easier compared to before? I reckon workflow was a tad bit different without WiFi cameras, Internet, megapixel mobile phones…?

Apart from having to find a lab to process films and the time that that would take, I don’t think it is any easier. With a digital camera and a laptop, photographers work much longer hours now in the instant media generation.

I often like to consider motorsport photography as challenging and exciting to master as it would be to learn to be competitive in a WRC car. How exciting this job is after years of work for you?

The challenge and thrill of discovering a new, unseen before angle is greater than ever.

Motorsport photography, and rally especially, is considered by many to be strictly limited to just showing cars and a bit of environment. Is there a room for creative, even artistic expression?

“Room for it?” I would say creativity and artistic expression are pre-requisite musts. 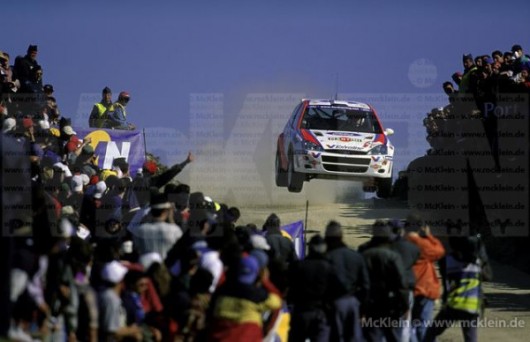 I am pretty sure you have thousands of stories and anecdotes, but was there ever a situation you would descibe as “Oh shit” moment? Run out of film, batteries, that sort of thing.

I broke the windscreen on Kenneth Eriksson’s rally car in Malaysia 1997, just before he was about to do his first shakedown run. Kenneth was OK about it, but I thought Subaru’s Christian Loriaux would kill me. Still, it was a good way to get to know the mechanics quite well, I bought them all a beer later that night.

Pick one rally, one driver and one photograph you would use to describe what rally is about, in one picture.

Colin McRae flying high on the downhill crests at the Bunnings stage in Western. He did it many times, but I would pick 1998 in A Subaru WRC as the ‘highlight’. Says it all: an Iconic car/driver combination, big action, crowds, scenery & passion.

What kind of photographs are your favourite, and do you even have favourites among so many images? Do you like close-ups or wide open shots, atmosphere vs. sponsor stickers?

For me, the best rally photographs are the ones where the image would still look good even if there was no car in it at all. So that would have to be a stunning landscape.

Which photographers you consider particularly inspiring and did you have any role-models when you started off your career?

I started off photographing racing cars, in that sphere there were two Frenchmen, Bernard Asset and Pascal Rondeau, who I both admired. I’m not sure about role model, but I got to know Pascal quite well and even travelled with him to a couple of Indycar races in the 1990’s. Latterly my good friend and F1 photographer Darren Heath has become quite a photographic inspiration.

In rallying, photographer Reinhard Klein is “The Daddy”. Utterly brilliant at what he does and I don’t have to worry about him because he is my business partner. I like the work of Pascal Huit, Daniel Roeseler, Francois Baudin, André Lavadhino and Richard Balint, all great snappers but none of them are suitable role models! I think I’ll stay the way I am, thanks.

Did you ever consider putting a camera on a shelf and grabbing a rally car wheel instead?

I know I can’t drive. I once drove Colin McRae, Martin Rowe & Richard Burns in the same car. This was my chance to show them what I could do. McRae thought it was hilarious, Rowe just said: “Does he know what to do if it goes wrong?” and Burnsie soon put a stop to it.

Why rally in particular and not some other form of motorsport?

I’ve tried the others (except bikes) and rallying is the only one where you get to travel and connect with the country and its people.

Canon or Nikon? Why?

Canon. When I was 14 I wanted to upgrade from the Olympus Trip I had. My parents pushed the boat out and bought me a Canon SLR with a zoom lens, I only ever added more Canon kit to it and stayed loyal to the brand (apart from the odd affair with Hasselblad) for 27 years. If I had to chose again, I’m not sure which I’d go for.

World Rally Championship is in very odd state at the moment, with no global promotion and still lacking TV coverage. Do you think things could have been done differently by the FIA when the North One Sport debacle happened?

Among the current crop of young talents, which one would you pick as the next really big thing happening to WRC?

I think we will see some good years ahead featuring Thierry Neuville.

Ford’s situation is rather amusing, or should I say difficult for them. They threw away several grand chances of scoring podiums and victories and now they’re minus number one driver. Is it time for major changes at “blue oval” team?

Petter Solberg and Jari-Matti Latvala are both good drivers, the only major change that could help would be a 5x bigger budget.

Which would be the most urgent repairs you’d do to WRC in order to improve the show for global audience and keep the fans happy, but at the same time not risking destroying the sport?

I would follow the Golf & Tennis models and instigate a WRC consisting of just 4 majors: Monte Carlo, Sweden, Safari & Finland (all run& promoted by the FIA). Then I would let the best of the rest form a Masters Series with more open regulations on cars (GT cars, S2000 & WRC) From the Masters series’we would have a European Championship, an Asia Pacific championship and an American Championship.

Endurance is big topic in FIA. You’re known to generally dislike the idea of suggested format. Do you think they’re not aiming high and tough enough and how would you do it?

Not at all, I’m a big fan of longer distance rallies. I love the idea of a couple of genuine Endurance events, but only if they include +120km stages. This could be done in Argentina, Kenya, Australia and possibly GB.

Is there a rally you would like to see removed from current calendar, and at the same time, which one you’d like to see put back on WRC schedule?

I don’t know, unlike many forms of entertainment the beauty of sport is that you don’t know the result beforehand. I remember when Richard Burns became world champion in 2001 he received the same texts messages from Carlos Sainz and TommiMakinen. They simply said: “Welcome to the club”. No disrespect to a magnificent WRC champion, but I think it is time that Sébastien Loeb welcomed somebody new into the club.

Colin McMaster’s work can also be seen on MaxRally website.