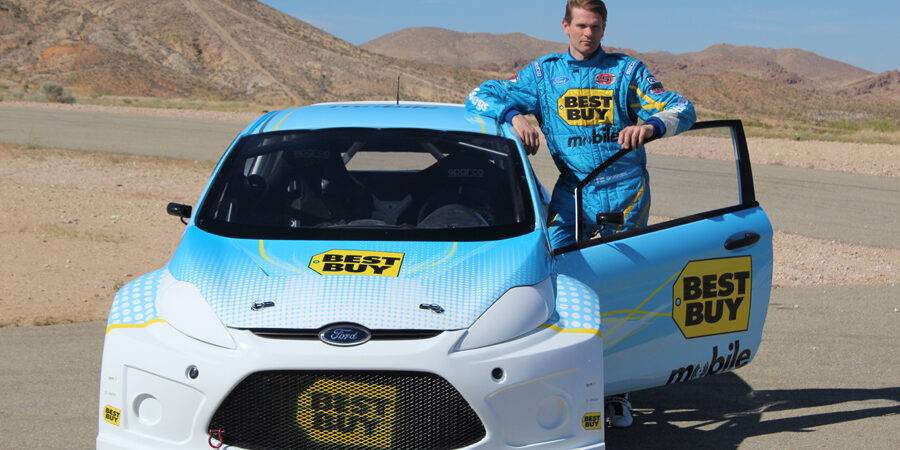 Following a successful pre-season test at the Willow Springs International Raceway in California last week and an inaguration event in Huntington Beach, Marcus Grönholm today confirmed his 2012 programme in his much-awaited full-time return to international competition. The 42 year-old double World Rally Champion outlined his participation in the six round Global Rallycross Championship in the USA with the Best Buy Racing Rallycross Team. The engagement represents an opportunity for the double WRC champion to harness his core rally skills and apply them to a new, dynamic, metropolitan format of racing entertainment that has set its ambition to re-define motorsport, especially for the youth market.

The Best Buy Rallycross Team will be run by Olsberg Motorsport Evolution – OMSE – headed by Andreas Eriksson, who will prepare two Ford Fiestas for the Best Buy Racing Rallycross Team to tackle an august field of US and European action sport talent that have been lured by the new arena-based, instant impact and all-action form of motorsport that is GRC. Marcus will join established UK rallycross driver David Binks to contend against converts from skateboarding, extreme sport motorcycle freestylers, drifters, X-Games skiers and truck stunt drivers who will join factory teams from Ford, Dodge, Hyundai & Subaru to contest events that will partner NASCAR & IndyCar races as well as the X-Games LA as part of the 2012 calendar.

Following the test in Los Angeles, Marcus said, “It’s great to be back in business with a full programme and a clear championship to aim at. What’s more, there is such a buzz around GRC, I think it is a form of motorsport that is set to explode. It’s great for the stadium audience, great for the TV viewer with 70ft jumps over your competitors and fast and furious racing that delivers results quickly. It’s simply addictive.”

Reflecting on his own prospects, he added, “I guess my CV sets me up well for this form of competition, but I am taking nothing for granted. There are all kinds of drivers coming into the series from very different action sport backgrounds, so I while I am 100% clear that our ambition at the Best Buy Racing Rallycross Team is to win, we’ll just see how we get on in Charlotte and take it from there. We’ve tested well, the OMSE-prepared Ford Fiesta feels great and frankly I can’t wait to kick off.”

The six-round series features five events that partner with NASCAR, IndyCar and the X Games, and one standalone GRC event commencing on May 26 at the Charlotte Motor Speedway as part of the NASCAR Sprint Cup Coca-Cola 600 bill.

Marcus’ progress in the Championship can be followed at a new website launched today at www.mgronholm.com, which provides links to all of Marcus’ social channels including Facebook, Twitter (@GronholmM), YouTube and Flickr that will provide news, updates and personal reflections on his US competition experience together with routine video and photography.

All of Marcus’ news results and other press information will be routinely available from www.compelo.co

Finally, we are missing a chicken, if anyone finds him, please send him home.