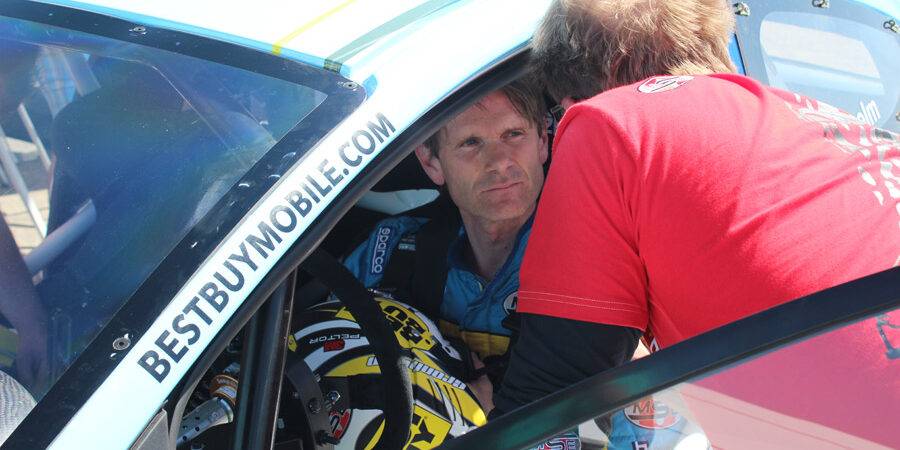 Marcus Grönholm confirmed his serious intent in the run-up to the first round of the 2012 Global Rallycross Series which commences this Friday and Saturday, part of the at the Coca-Cola 600 weekend at Charlotte Motor Speedway in North Carolina.

Grönholm will lead out the Best Buy Racing Rallycross Team in a Best Buy Mobile Ford Fiesta prepared by Olsberg Motorsport Evolution (OMSE) for the six round US championship and prior to the start of the season, set out his ambition for the season ahead.

“I have tried my hand at GRC on quite a few occasions in the past two years, and last year I managed some wins from a limited programme. But this year is altogether different. Best Buy are running a committed two-car programme for the whole series and OMSE has made a considerable amount of financial commitment in the development of a completely new car. To match this ambition, I am signed up for all six rounds this year, so I am 100% committed to a full push on the series this year. Nothing less will do,” said the two time World Rally Champion from his home in Inkoo, Finland.

He continued, “GRC 2012 is the first time since I departed WRC in 2007 that I have undertaken a full series. Since then, I have always had the sense of unfinished business in motorsport, so some five years later, this season marks one of more serious intent for me and it will have my full ambition. So I hope I can help to deliver a very successful season alongisde my team-mate David Binks for the Best Buy Racing Rallycross Team.”

The GRC class of 2012 includes manufacturer involvement from Ford, Dodge, Hyundai and Subaru, with a crop of Stateside action athletes drawn from a wide range of sporting disciplines from native US rallying, MotoX, drifting and even skateboarding, with headline talent including last year’s Champion, Tanner Foust, Travis Pastrana, and Ken Block.

“Although I had wins in Irwindale and Pikes Peak in 2011, I didn’t have it all my own way last year, so I am taking nothing for granted going into the first round”, said Grönholm. “GRC has massively ramped up in terms of manufacturers & competitors, the bill that we’ll be sharing with NASCAR, IndyCar and the X-Games and just the general level of expectation from its growing following. So I am pretty clear this is no place for chickens.”

The preparation for the season has be soundly built on a focused development programme for the Best Buy Mobile Ford Fiesta which underwent an intensive test and pre-season shakedown two weeks ago in Willow Springs. Marcus announced himself very pleased with the technical progression of the car having spent three days finessing final development.

“OMSE’s Team Principal, Andreas Eriksson, rightly has a great reputation in GRC and of course in wider motorsport categories, so while it is impossible to say where we are relative to the competition just yet, I felt great in the car and I have every confidence that OMSE will have delivered us with the tools to go out and do the job in Charlotte,” Marcus said at the conclusion of the LA test.

In Charlotte, the season-opening GRC round will partner the twelfth date on the NASCAR Sprint Cup Series calendar. “Best Buy Racing will be in action in Charlotte and once I have done my work, it will be a great opportunity to look over the other side of the fence and see how one of the world’s greatest motorsport series hangs together,” said Marcus.

GRC activity commences on Friday with the season’s opening points on offer on Saturday. Results, photography and news will be available courtesy of Marcus’ website at www.mgronholm.com and his Flickr, YouTube, Facebook and Twitter feeds, all of which can be accessed from the site.