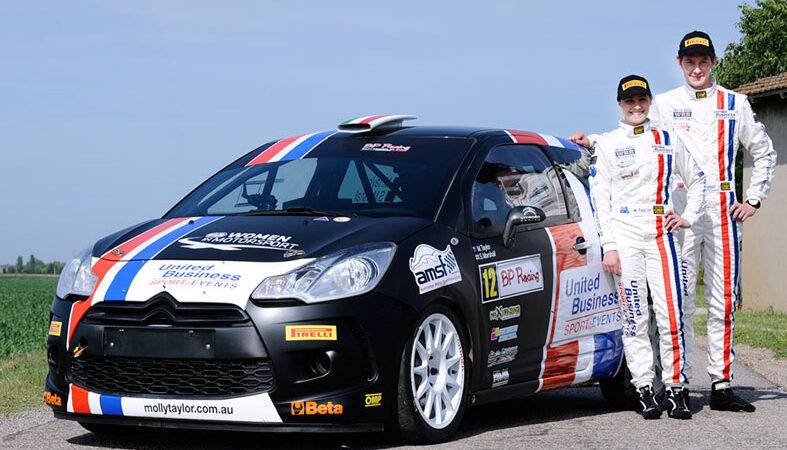 First test for the Australian lady driver at the wheel of the Citroen DS3 R3T with which she will compete in four events: Geko Ypres Rally, Coppa Citttà di Lucca, Neste Rally Finland and ADAC Rally Deutschland.

Molly Taylor, whose sports management will be taken care of by United Business, tried today in Italy the Citroen DS3 – BP Racing, with which she will contest four rallies. The programme of the crew Molly Taylor – Seb Marshall comprises the participation in the Geko Ypres Rally, valid for the FIA European Rally Championship and the Intercontinental Rally Challenge, the Rally Coppa Città di Lucca, and two rounds of the FIA World Rally Championship, the Neste Rally Finland and the ADAC Rally Deutschland. The test allowed the crew to become familiar with the car, which they were using for the first time, and with Pirelli tyres in view of their debut in the Belgian rally scheduled in two weeks.

Molly Taylor said: “For me it is a fantastic opportunity, and a great step forward in my career. To have the opportunity to work with a professional team and a different car from the ones I drove before will allow me to learn a lot. I am trying to soak as much as possible, this car has many  possible settings, we are trying to understand it as we go. We have a lot of work to do this year to gain experience, we will take what comes and try to make the most of it”.

Pier Liberali of United Business said: “We started this cooperation with Molly Taylor, because we believe in this lady driver who has proven to be very solid and fast. I think she is one of the fastest lady rally drivers at world level today. Just like we do for all the other professional drivers whose management we take care of , we have prepared for her a medium to long term programme which caters for these events, although we are working to increase the number of races which she will be present in for 2012. For these events we will use the structure of BP Racing, already used by  another one of our drivers, and which has always proven to be a well prepared and very professional factory”.

Fabrizia Pons (Representative of the FIA Women in Motorsport commission) said: “I am very happy that Molly has the opportunity to drive a performing car such as Citroen DS3: to start with Ypres is a beautiful challenge for her, but I’m sure that she will rise up to it”.