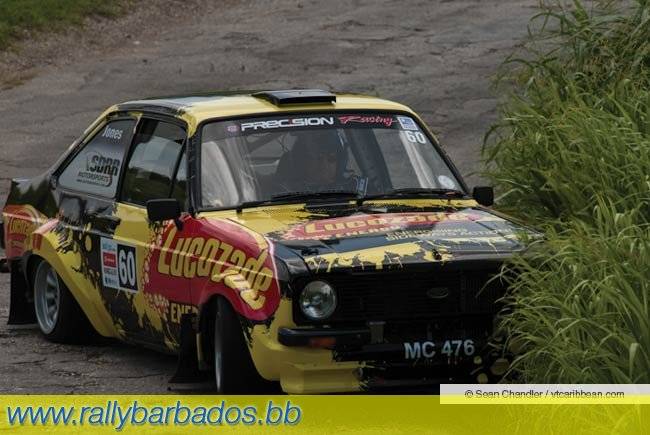 A record 101 crews from 15 nations are listed on the final running order for this weekend’s Sol Rally Barbados, the Caribbean’s biggest annual motor sport International. Based on the results of last Sunday’s Sol Go Further/Scotiabank King of the Hill, the seeding was published by the Barbados Rally Club today (June 6), in advance of this evening’s Briefing Meeting and Welcome Party.

From Saturday’s opening stage in the north of the island to the climax of day two, the 7.8-kilometre Power Stage between Stewart’s Hill and Padmore Village, competitors will face 22 closed-road tarmac special stages and a total stage distance of a little over 120 kilometres.

At 9.30am on Saturday, England’s Paul Bird and Scottish co-driver Kirsty Riddick will pull out of the Greenland Agricultural Station carrying start number one on the Frank Bird Poultry/Fuchs-Silkolene Ford Focus WRC08. They will be followed by the most successful driver in the 22-year history of the island’s premier event, 12-time winner Roger Skeete, co-driven in the Sol/Michelin/Da Costa Mannings Auto Centre/Simpson Motors Subaru Impreza WRC S12 by Louis Venezia.

In addition to the battle for overall supremacy, there are no fewer than 14 separate classes to be decided, most of which involve island competitors pitting their skills against either regional or international entries, sometimes both. The entry will be reseeded for the 9.00am restart on Sunday, based on the results of the opening day’s 12 stages.

RallyFM.net will broadcast live commentary, news, information and interim results from 9.30am local time each day of Sol Rally Barbados 2012 . . . and there are now more ways to listen. On a laptop or PC, either go to www.rallyfm.net and click on ‘Listen Live’ or go to www.rallybarbados.bb and click on the RallyFM.net link. To listen via your iPad or mobile phone, go to the Appstore, Android Market or Blackberry App World and download the free App Tunein Radio – then simply search for ‘rallyfm’.

In addition to the improved radio service, regular updates on Sol RB12 will be posted on Facebook (www.facebook.com/BarbadosRallyClub) and Twitter (search for #rallybarbados and follow us). For results updates, go to www.rallybarbados.bb and click on the rallyscoring.com link.

On the ground, BajanNav is not only helping Sol RB12 competitors to find special stage starts and other important locations, as last year, but has introduced two new features to enhance its support of the event. The 2012 overlays for John Mann’s BajanNav, the GPS map for Garmin sat navs, now also include suggested vantage points for spectators, plus the Service Parks, as well as the start points of each special stage.

In addition, AccuNav has published an on-line, interactive map showing all the stages and spectator points. Seeing the route on-line allows competitors and spectators to see the whole rally in context, and plan their movements. Furthermore, Barbadians not involved in the rally will be able to see areas to avoid. Go to www.BajanNav.org, where you can find links to the on-line maps and the POI download.

“Last year’s initiative proved popular,” John Mann MBE, CEO of AccuNav Ltd explained. “When you have so many visitors moving around the island in such a short space of time, there is a high chance that some of them will get lost, which is unfortunate because we would like them to watch and enjoy Sol Rally Barbados.”