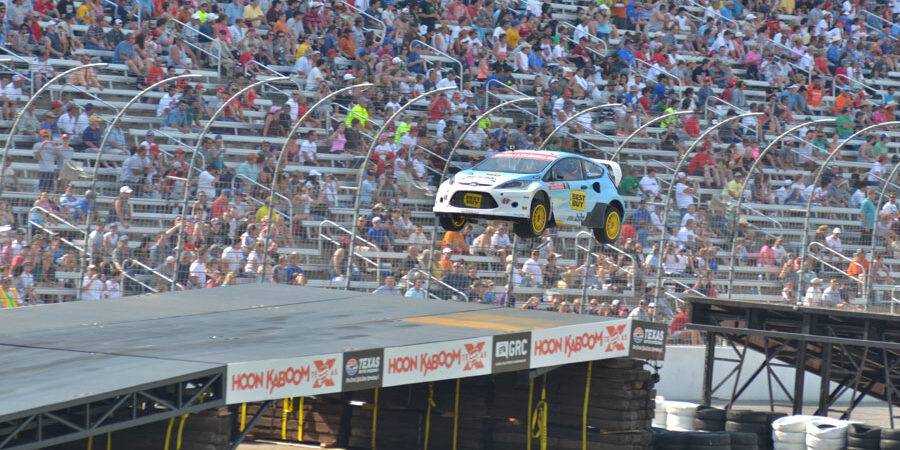 After progressing seamlessly through to the finals at Texas Motor Speedway for round 2 of the 2012 Global Rallycross Championship, Marcus Grönholm maintained his 100% winning record this season with another clean sweep of qualifying and heat wins before going on to take another set of maximum points in a dramatic finale tonight.

Marcus led from pole to win his heat, the first of the afternoon, seeing off the challenge from Travis Pastrana and Andy Scott. He joined the first two placed drivers from each of the following three heats – together with two Last Chance Qualifiers – to make up a final grid of ten cars featuring Marcus and competitors Foust, Hubinette, Deegan, Scott, Isachsen, Millen, Binks, Block & Verdier for the six lap finale, complete with a 30ft span jump on every lap.

The first run of the final brought out the red flags after a stalled jump attempt by Sverre Isachsen in his Subaru on lap 4 of 6. It was not the only appearance for the red flags though, and the third re-start saw Marcus follow a committed strategy of diving in for the shorter joker lap off the line, while his key opponents, Tanner Foust and Brian Deegan, stayed out on a full lap and opted to play their joker later. The strategy and the committed pace of the Finn saw him open out and maintain a lead to the flag to give him his second successive victory in two weeks and a maximum points score.

“So, what a tough day, I must say. I knew at the start of the week that Texas would be all different to Charlotte and it would take a whole lot more heart to win here. But we did it and it is a great, great feeling. The seeding and the heats seemed pretty straightforward, just keep your nose clean and stay out of trouble, but the final, well I knew with guys like Tanner and Brian that I’d need to find something special to stay ahead of them. I had a bad start first time round and maybe not a perfect start for the second time, so I guess I was fortunate that the flags came out twice. On the final start, it was perfect, we kept it all together and got over the line first. I must thank Best Buy and all the guys at OMSE, everyone has done a brilliant job this weekend. The only thing I reckon I want now is some physio – I am not the only one with a sore back after all the jumps today, but I hope it made a spectacular show for the fans,” said Marcus.

After Marcus and Tanner Faust, the top five to finish in the Hoon Kaboom feature race in Texas were Brian Deegan, Rhys Millen and Marcus’ team-mate, David Binks.

Aside from a maximum points yield that extends his lead in the Global Rallycross Championship, the win ensures an automatic invitation for the Finn to take the Best Buy Mobile Ford Fiesta Mk7 to contest the next round of the GRC series as part of the X Games in Los Angeles that commences on June 30.

“X Games is definitely one of the highlights of the GRC season, racing on the roads around the Staples Centre in downtown LA is incredibly cool and only ten of us can go, so it is a really important prize we have won today,” said the Texas victor.