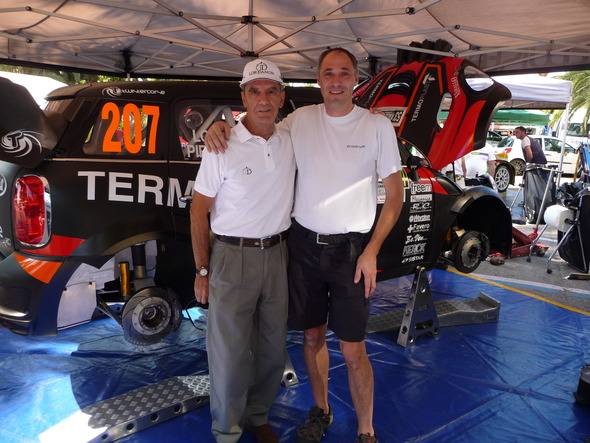 For each event this year team picked an official guide to write down a preview in a bit more relaxed manner, giving team members a chance to provide their own thoughts on the upcoming rally, as well as say a word or two about their past and how they become infected with this sport in the first place.

Richard Thompson was selected for Rally New Zealand, and while he talked about team’s ambitions and goals for Kiwi event, he also shared a brief overview of his first steps in the world of rallying. Interesting read!

Looking ahead to Rally New Zealand

‘I’m Richard Thompson – or ‘Tomo’ as my friends and colleagues call me – and I’m WRC Team MINI Portugal’s Engineer. I’ll be your guide on our latest MINI adventure as we head halfway round the globe for Rally New Zealand, one of my favourite rounds of the WRC where we’re aiming for the best result possible.

‘I come from a village south of Dalby forest in the north of England, which the then named Rally GB went through and I remember as a very young boy seeing cars pass our house and being serviced in the village, I thought it looked great and wanted to be a part of the sport as soon as I could. Soon a MINI (of course, what else?) come up for sale that needed some work, so I snapped it up! I spent hours with the A series engine found in the car in those days, fitting bigger valves, a rally camshaft, better pistons. I fitted to it a close ratio gearbox and a limited slip differential that made it really tricky to drive but had great traction! We went all over the country competing, the only limiting factor being the ability to pay for the fuel, tyres and entry fee… I did manage to win a local rally but knew I wasn’t going to trouble Ari Vatanen at any time in the near future!

‘While I might not have had my eye on a world title in the car, I certainly did out of the car and quickly dedicated myself to rallying in any shape or form. Now, as a Chief Engineer, my job for New Zealand started straight after Greece. I have to ensure we have the correct build specification for the cars and also the hardware to allow the drivers to go as fast as possible – the correct transmission settings, springs, dampers and anti-roll bars need to be specified as well as set correctly on both cars. We have a total of five sets of dampers for the two MINIs, this is for the whole of the event for the rally – a fixed maximum applied by the FIA – and spares need to be set to cover any expected changes in conditions. The event this year is run in their winter but can be quite dry as well as very wet obviously! It’s pretty fantastic to be involved with a manufacturer that meant so much to me as a youngster. I remember sitting in the newly completed MINI John Cooper Works WRC for the first time in the workshop and really feeling a warmth and affinity with the car! Then, last year whilst working in Italy I was even able to show my boyhood hero Sandro Munari who in 1977 won the then named World Cup for drivers around Piero Longhi’s MINI John Cooper Works which was a real honour.

I’ve been to Rally New Zealand a lot of times and have some great memories. One of the best is from 2006 when I was there working with Moto GP legend Valentino Rossi, it was amazing – what a fantastic guy! He loves rallies but hates getting up early in the morning. During recce, the recce mechanics would drive his recce car to the start of the stages, he would get up at the last possible moment and jump into a helicopter (!) the team had hired for him , fly to the start of the stage and then do the recce. Pace notes were also of secondary importance – if he found a nice view, he’d stop in the middle of the stage, take pictures, get back in the car and continue. It was good fun working with Valentino!

‘This time round after I touch down, I’ll take half a day to get my bearings after 30 hours of travel, then I’ll go and inspect the stages. It’s great to get out and see the conditions the drivers will encounter during the rally. As engineers we note each kilometre in detail. We register things like surface conditions, how hard the surface is, the diameter of the gravel and any clean lines. We also consider if the stages will rut badly, gradients and any other details that help to ensure we are as competitive as possible. This might include something as simple as noting phone service in or at the stage, which is essential to ensuring the crew gets the best technical backup possible.

‘In terms of differences with Rally Acropolis – our previous event – which was hot, dry and quite hard on the cars, New Zealand won’t be as tough on the crews as the ambient temperature inside the cars will be much lower than in Greece. The set-up won’t be too different, but the crews will need a slightly softer car, with less focus on sheer endurance. Also this year it will be probably colder, wetter and more slippery compared to other years so the drivers will have to focus on doing a good job on the recce to get pace notes as near to perfect as possible making careful notes of surface changes in particular. With Armindo / Miguel and Paulo / Edu having competed in New Zealand before, hopefully both crews will have a head-start on this. They’ll have also to spend time and energy on watching the recce videos carefully and get to know the stages. It will be a tricky event with a lot of slow turns, changes of grips and rough bits so a good preparation is the key to success! The drivers have to compete, almost straight away on one of the most difficult stages of the year, it’s name is Whangaa coast and will be run as SS2 and a second pass through the stage as SS6. It has seen some titanic battles over the years and is very enjoyable for the drivers – if they get it right that is! Watch out for the fantastic footage oftened filmed from a helicopter.

‘That’s all for now, I’ll be back live from New Zealand during the week to update you on the team’s progress at the rally.