Hanninen in the lead, Mikkelsen in trouble 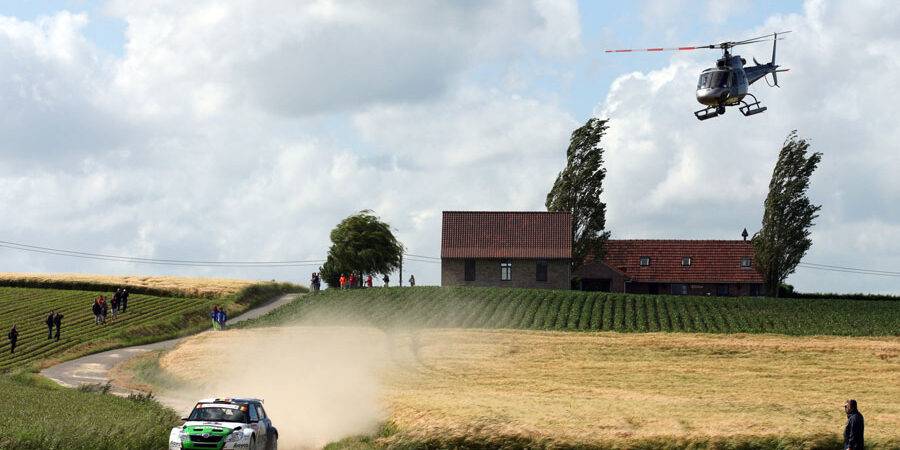 Fast and tight stages of Ypres Rally were made even more challenging after rain brought in huge amount of dirt and mud from the surrounding fields.

To get to the finish in one piece and without problems should be considered an achievement, yet crews need to step it up and actually fight for positions in this prestigious round of the Intercontinental Rally Challenge. Andreas Mikkelsen came to Belgium seeking to further strengthen his lead in the overall standings as well as to finally claim that elusive victory on tarmac.

However, Mikkelsen is going against some very strong competition, led by Juho Hanninen, winner of several recent European Rally Championship rounds and the local hero and multiple winner of Ypres Rally, Belgian Freddy Loix. Despite the fact that he won this event seven times and probably knows the stages inside out, Loix did not enjoy a very successful day one, and same goes for Mikkelsen as well.

Instead it was Juho Hanninen who came out on top after day one. There are 12 stages on the menu tomorrow, and below is official IRC recount of the events on day 1.

Intercontinental Rally Challenge champions past and present suffered differing fortunes on the opening day of the Geko Ypres Rally in Belgium. While Juho Hänninen, IRC title winner in 2010, impressed by reaching the overnight halt leading by 26.8s, defending champion Andreas Mikkelsen’s hopes of a first IRC victory on asphalt have suffered a huge blow after he went off the road into a ditch on stage five, losing more than one minute in the process.

Mikkelsen, in a ŠKODA UK Motorsport Fabia Super 2000, made the perfect start to the event, celebrating his 23rd birthday in style by winning the opening Dikkebus stage west of Ypres. However, Hänninen hit back by going quickest on the next stage despite briefly running off the road in his factory Fabia. Thereafter the Finn, on hard compound tyres, proved unstoppable as Mikkelsen struggled with a lack of stability caused by his decision to select a medium compound tyre with several ‘cuts’ for extra grip in the drying conditions.

Anxious to ensure a podium finish in his efforts to make it two IRC titles in succession, Mikkelsen opted for a risk-free strategy on stages four and five only to brake too late for one of the rally’s countless slippery junctions and go off the road. “I was trying not to let Juho get too far away,” said Mikkelsen. “I lost one minute and I will do all I can to catch the time back tomorrow. I just have to drive fast.”

Hänninen, who could make it 10 IRC-career wins if he stays in front on Saturday’s 12 stages, said: “It was not so easy on the first stage because the conditions were quite slippery but it’s not been a bad day and I’m happy to be leading. Staying on the road is my only plan for tomorrow.”

Mikkelsen’s delay inadvertently caused frustration for local hero Freddy Loix, the seven-time Ypres winner, who lost time when Mikkelsen rejoined the road a short distance in front of him. Making his first start in the IRC in 2012, Loix is second overall in his 2C Competition-run Peugeot 207 S2000.

ŠKODA Belgium’s Pieter Tsjoen admitted to a few gear selection mistakes but holds the final podium spot, albeit a scant 13.4s ahead of Mikkelsen. Patrik Flodin is a strong fifth on his debut for Petter Solberg Engineering and his maiden run in Ypres. The Swede says he’s still not fully recovered from the shoulder injury that kept him out of Giru di Corsica-Tour de Corse back in May. His only mistake occurred when he overshot a junction on stage six.

Poland’s Michal Sołowow holds sixth in his Peugeot with Mathias Viaene seventh and Oleksandr Saliuk eighth on his Ypres debut in a Dream Team Ukraine Fiesta. Robert Barrable wasn’t satisfied with the set-up of his ŠKODA Ireland-backed Fabia but is nevertheless on course to claim a top 10 finish on his second Ypres Rally appearance in succession, despite an overshoot on stage two.

Andreas Aigner heads the battle for IRC Production Cup honours in his Subaru Impreza R4 STI after turbo failure slowed Bob Colsoul on the final stage. Aigner, from Austria, reported a bad vibration and a loss of brakes on stage three and an overshoot in the low-lying sun on stage six. Cédric De Cecco is second with Kris Princen third in his Renault Mégane RS. A replacement gearbox at mid-evening service transformed the performance of Jasper Van den Heuvel’s Ralliart Mitsubishi Lancer Evolution X.

Princen is also eligible for the IRC 2WD Cup and tops the division with Martin Kangur 3.6s behind in his Honda Civic Type R. Mathieu Arzeno is third with former IRC 2WD Cup champion Harry Hunt on course to extend his title lead in fourth position.

Florion Gonon’s first start in the IRC in a Super 2000 car ended after a handful of corners of the opening stage when the Swiss crashed and rolled his Saintéloc Racing Peugeot 207.

Saturday’s action consists of 12 stages and begins with the 26.75-kilometre Heuvelland stage at 10:43hrs local time. The finish is scheduled for 22:40hrs in Ypres’s main square where thousands of fans are expected.