WRC Team Mini Portugal: “The Finish but not the End” 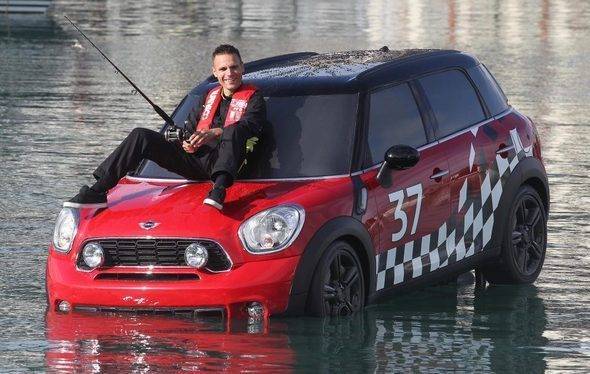 ‘It’s Tomo again this will be my last column here at Rally New Zealand. It was a great weekend for WRC Team MINI Portugal with both drovers successfully completing every stage! Armindo finished the rally in the Top 10 in 8th earning himself four WRC points and Paulo brought his MINI home safely in 17th place overall.

‘After two long drives to Remote Services on the first two days, it was great to enjoy a quiet day in Auckland’s main Service Park and I have to tell you we had a fantastic view of the city skyline. Today’s stages were based north of Auckland and the itinerary included two runs through a Tarmac Super Special Stage at the city’s World Memorial Museum.

‘We’re getting used to the rain now, and it was well-predicted last night! Today Armindo had a mix of two used soft tyres on the right side of his MINI and two new soft tyres the left side. Choosing to fit the tyres side-to-side aims to keep the balance between the front and the rear of the car. Paulo’s MINI sported four used soft tyres still in good condition and reported that the Puhoi stage (SS17) was particularly slippery. Armindo’s task for today was keeping Ken Block behind him and then waiting to see if any crews in front had a problem. This strategy worked well and we bagged 8th place after Tanak rolled on the penultimate stage. We had a trouble free rally and it’s a real testament to the team that after three hard events the cars ran like clockwork. Armindo’s confidence grew and his times were the most competitive of his MINI career on gravel, which is a real bonus going into the next event, Rally Finland. In Finland the roads will be in complete contrast to New Zealand but grip levels can be similar.

‘I had the benefit of being supported by George Corfield for the week. George specialises in working with engine activity, fits in very well with the team and has a lot of experience. He also worked on the development of MINI WRC so can really give good insight into how to prepare the car best for an event!

‘One of my favourite memories of this week for the team was getting to see our Team Manager Bruno fishing on a MINI [pictured above] in the middle of Auckland’s harbour, a real treat! :-) Although, the professional highlight of the event for me was getting both cars to the finish without problems. It’s been a busy run, with Rally Argentina, then MINI United followed by the Greece test, Acropolis Rally and Rally New Zealand coming thick and fast. We had to re-shell a car in the Service Park in Greece after an accident on the test ruled out using the car on the rally. This was a real feat and showed that the team has real depth in being able to react quickly and effectively to unpredictable situations. Most people didn’t even notice this occurred other than the few people who spotted a bodyshell arriving on a transporter late on Tuesday afternoon prior to the rally. For this reason I’m really delighted that the guys at MINI New Zealand gave all the mechanics and myself a traditional Maori friendship token to mark the hard work that’s gone in since the start of the season, especially over the last few months. Often mechanics are the unsung heroes of a rally operation!

‘It was great to be back in New Zealand, it’s a truly beautiful country. It was nice to drive around the North Island, the service in Raglan, refuels and Whangarei were a pleasure to visit. New Zealand has stunning views, the weather at this time of year makes it all the more special – watching huge clouds roll in across the rugged landscape you often think you could be in Wales and then you are reminded you aren’t when you spot a huge prehistoric fern! Magic!

‘For now it’s time to pack up the containers for the sea freight and await the cars coming out of Parc Ferme so we can prep them for their long flight back to Europe. Today I’ve already sent the setup sheets, damper and transmission specs for the Tarmac test in San Remo where we have some good roads which mirror conditions in Germany. In no time at all, Rally New Zealand will be a fond memory!

‘Thanks for following WRC Team MINI Portugal’s adventures over the weekend and stay tuned for more behind the scenes stories!