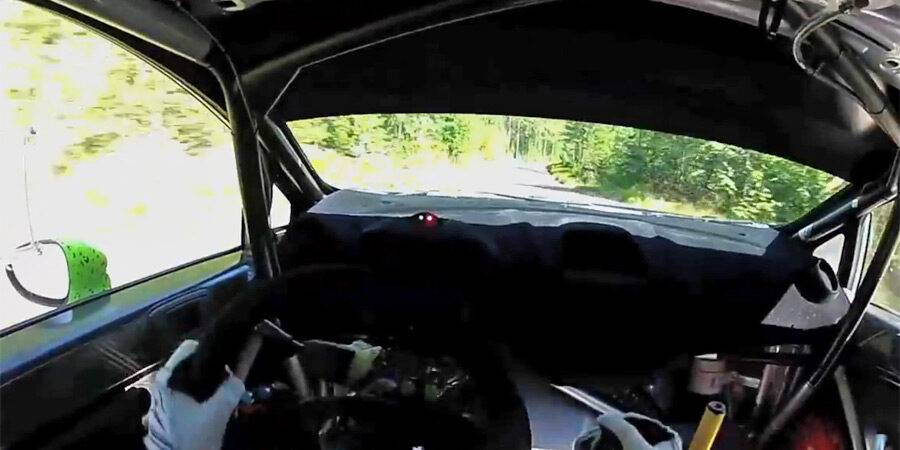 Ken Block and Alex Gelsomino (the navigator dude) should be regular feature on every World Rally Championship round, period. Yes he is not as fast as Jari-Matti Latvala or consistently on top like Sebastien Loeb, but he is also far less experienced than those two in WRC. That being said, Ken is still tons faster than me and quite possibly you, so that ends this discussion quite effectively.

What Ken does muuuuch better than any of our regular WRC pilots (with possible exception of Mikko Hirvonen and, back in the days of Mr. Hollywood, Petter Solberg) is bring his job and his sport to his fans. Ken (or guys from his Monstrous team) are constantly feeding images, footage and comments to Twitter and Facebook, and Ken is always looking for new angles and new ideas of showing off his skill and the thrill of the motorsports to his huge army of fans.

So for Finland Ken glued one of the GoPros to his helmet and took his Fiesta RS WRC to one typical Finnish forest stage section. And this is how you get the sense of speed, not by securing a camera to roll cage and let it sit there. Sure, Ken is not the first rally driver to have a helmet cam, but it’s still a great insight into what driving fast means in Finnish. If you listen carefully, you can hear Fiesta suspension grunting a very distinct: “Perkele!” on each landing. And there are many of those in Finland.

As concluded before, American drivers and teams should be role models not only to regular WRC teams but to FIA as well in how to shape the future of the sport and bring it closer to fans. Who would have thought that camera strapped to helmet and resulting video being posted to Youtube would be so effective, right?