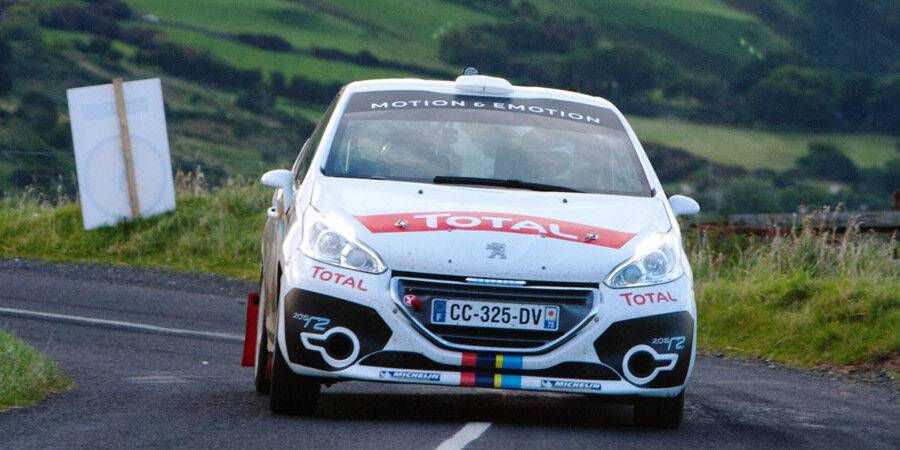 Peugeot Sport is continuing the development of the 208 R2 in near-rally conditions. After outings on the Tour de Corse and a series of test sessions, the 208 R2 took part in this weekend’s Ulster Rally, based in Northern Ireland, a market where the competition for customer-spec cars is particularly fierce. The newcomer impressed those observers and potential customers who attended the event.

The 2012 Ulster Rally provided the 208 R2 with a chance to run as ‘zero car’ which allowed it to be presented not only to the local public but also to the teams and drivers competing on the event. The asphalt rally is notorious for its bumpy, low-grip surfaces, but Craig Breen/Paul Nagle posted some very strong stage times over the weekend to showcase the car’s competitive potential in its class. The 208 R2’s first appearance outside of France enabled it to see how it compared with rival R2 cars (Ford Fiesta R2, Renault Twingo R2 Evo, Skoda Fabia R2 and Citroën C2R2 Max) competing on the rally. It didn’t take the 208 R2 and its crew long to find their marks and their pace matched that of the class’s fastest runners as Craig and Paul notched up a score of five fastest times*.

”It was great to drive the car on this event and I would like to thank everyone at Peugeot Sport for the amazing work they have put in since last January,” commented Craig Breen on the finish ramp. “The rally passed off without a hitch and I am thrilled to have been able to drive the 208 R2 here. It’s a fantastic car which I would have loved to have had for my debut in the sport. It’s the perfect customer-spec car. It was quick out of the box, so all we had to do was fine-tune the set-up and I think we made good progress between the start and the finish of the Ulster Rally.”

Technically, the 208 R2 fulfilled its mission in several areas to the letter. “We were very competitive compared to the top R2 cars here,” notes the car’s Project Manager, Yann Goraguer. “The weekend allowed us to validate our set-up for this type of surface which is quite common across Europe. The 208 R2 also proved perfectly reliable from start to finish and that’s another area where it is particularly strong.”

The 208 R2’s development programme continues in order to work on its set-up for other types of surface and to promote the car to the widest possible audience. Its 2012 diary includes four more gravel and asphalt rallies in Europe, including another visit to the UK at the end of September for the British Rally Championship (BRC) Open Day. Other test sessions have been planned to fine-tune its set-up ahead of the rallies where it is due to appear during the latter part of the year.

(*) unofficial times only, because the ‘zero car’ did not count towards the rally’s official classification.