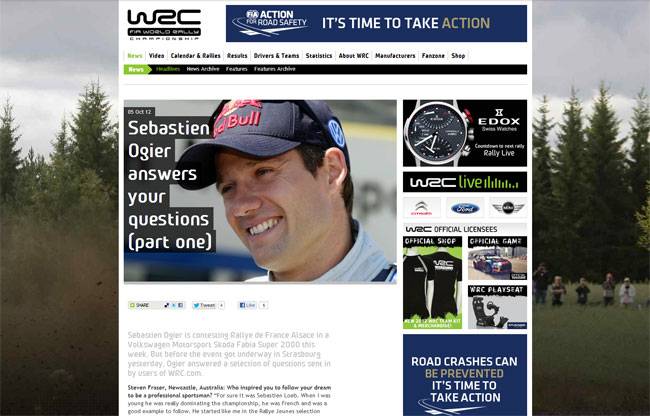 To be pefectly honest, I have no idea if this feature is sign of new things coming to WRC or is just an idea someone had at some point, and went on to make it happen, but it’s not that important in the end. In case you’ve missed it – Volkswagen ace Sebastien Ogier took some time to go through fan’s questions and replied to some of them. Sure, replies are sometimes quite short and there is only handful of questions you can actually throw at busy guys such as Mr. Ogier, but regardless, it was a great read.

Some time ago I wrote about the importance of bringing the drivers and sport closer to fans, and one of the ideas there was to have drivers talk about themselves in not so formal manner. And this is just what WRC.com seem to be doing in series of articles. Former Citroën works driver and team mate to Sebastien Loeb was kind enough to provide some details concerning his first steps in rallying, how he met his co-driver Julien Ingrassia, and of course, his relationship with Seb Loeb.

Perhaps I missed similar sessions with other drivers in the past (admittedly, I was forced to skip good part of the season and I’m still “stuck by the side of the road” for the moment), but either way – great stuff and please keep it going with more drivers, team personnel, manufacturers, TV and radio hosts, and so on. You know, let’s make this into a show for all the good reasons, eh?