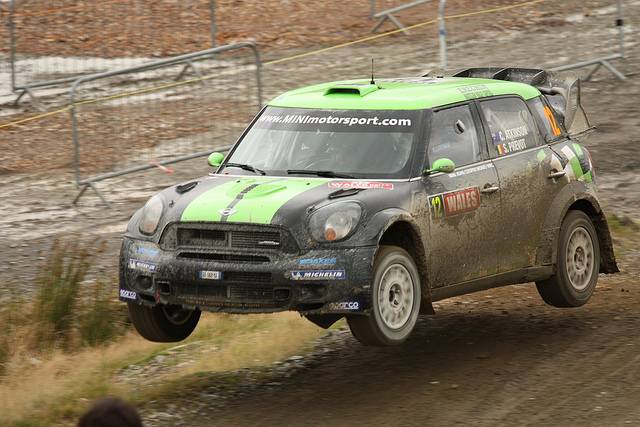 Following Mini’s official announcement it is now clear what the future holds for WRC Team Mini Portugal. Nothing. The team will lose it’s official manufacturer status following this season, which was most likely the plan from the start. Mini had to take part in all rallies this year in order to secure homologation for their Mini John Cooper Works World Rally Car. They did that and now they’re pulling the plug and withdrawing from WRC as manufacturer team. Mini will, however, remain involved in WRC as cars supplier for customer teams. At the same time, co-operation with Prodrive continues and that includes further development of brand’s WRC machine.

Another chapter in awkward story of Mini’s return to World Rally Championship. Prodrive failed to find sponsors thanks to lack of TV coverage so Mini picked the cheap (or should I say self-funded) solution of WRC Team Mini Portugal for 2012 in order to secure homologation. Many retirements, poor results and driver related dramas marked team’s first and (it seems) only WRC season. Briefly, things looked a bit better with the arrival of Chris Atkinson, but now his future is also in question.

For all I know, WRC Team Mini Portugal (oddly enough, they’re still using that name, no hard feelings Mr. Araujo?) might be around next year as well, as one of the Mini customer teams.

As for Mini, they’re out of this WRC thing as works team – too expensive and dare I say too competitive, with the arrival of Hyundai and Volkswagen. It looked a bit odd right from the start, though. Mini’s cars are not really competing with high-volume models such as Volkswagen Polo and Citroën DS3, if that is of any importance in this matter.

For now all we can hope for is that situation improves drastically for everyone involved in the WRC, and with Red Bull it just might. Perhaps Mini still can make it, in some other time and circumstances. In the meantime, customer teams and Prodrive will be only thing linking Mini’s legendary heritage to the modern day World Rally Championship.

One final suggestion, or should I say wish – does anyone else wish to see Chris Atkinson join Dani Sordo in what could be strong, if not-full-works Prodrive team for 2013?

MINI will terminate its works involvement in the FIA World Rally Championship (WRC) at the end of the 2012 season. The company has made this decision after careful consideration.

Dr. Kay Segler, Senior Vice President MINI Business Coordination and Brand Management: “MINI will abandon its works involvement in the WRC at the end of the 2012 season. By the end of the season WRC Team MINI Portugal will have competed in every rally in 2012. As such, in accordance with FIA regulations, we will have achieved the WRC homologation for the MINI John Cooper Works. In doing so, we would have achieved the prerequisites to allow those interested to continue to run the car in the WRC on a customer rallying basis. BMW Motorsport will continue to further develop the 1.6-litre turbo engine in conjunction with Prodrive. In a very difficult commercial environment, MINI has played an active role in ensuring that friends of the MINI brand can continue to participate in motorsport. As such, the MINI family is retaining its presence on various international platforms and getting even closer to its customers. We would like to see the MINI John Cooper Works WRC continue to run competitively in WRC and other championships. We would like to thank Prodrive, WRC Team MINI Portugal and our partners for the good cooperation, and wish all drivers, teams and customers a successful future in rallying.”

MINI Motorsport has secured the future of its customer teams, while Prodrive will still be able to run, optimise and sell vehicles in the future. BMW Motorsport will continue to develop the 1.6-litre turbo engine and provide Prodrive with parts.

From its rallying debut early in 2011, the MINI John Cooper Works WRC turned out to be a successful model: MINI drivers collected three podiums and many top-ten finishes at the wheel of this car. Arguably the biggest success was achieved by Dani Sordo (ES) in January 2012, when he finished second at the comeback of MINI at the legendary Monte Carlo Rally. With three wins in the Principality – back in 1964, 1965 and 1967 – the Mini laid the foundation for the unique reputation of the brand in rallying.