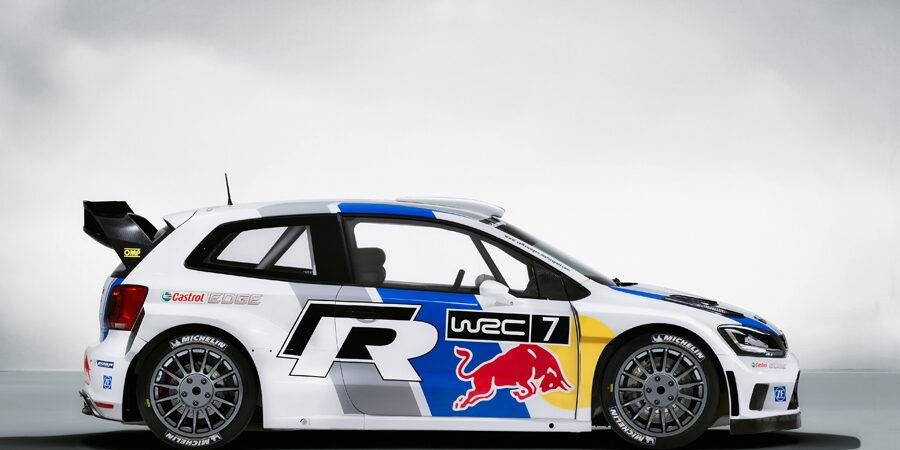 Selected few images from official photo shoot showing Volkswagen Polo R WRC machine. This is the car Sebastien Ogier and Jari-Matti Latvala will use next year from the word go. Andreas Mikkelsen will join them a bit later, in Portugal.

So, the car is white, which is a bit of a surprise given the Red Bull and Volkswagen record of using dark blue scheme, for example on their Dakar Rally car. I complained the other day about the potential problems of using dark colours and I was politely reminded that dark blue was working nicely on former Subaru WRC cars. Working nicely is putting it mildly – that combination of golden wheels, screaming lime-yellow-green decals and deep blue body still to many represents the essence of rallying and is without a doubt one of the most iconic liveries in the history of the sport.

Either way, I do like the looks of this car, as irrelevant as it may be. But for me, car must be stunning to look at, and it must stir up your emotions even when it’s standing still. You want to inspire fans and tell a story about the power of these machines. In short, you want badass car for badass sport, and whether you do it by inspiring decals and colour scheme or by pushing the bodywork design ideas, I don’t care. To some extent Polo reminds me of the 80s machines, the monsters of the Group B, with it’s big intakes and sharply cutoff edges. It also brings back memories of another car that despised curves and round shapes – Lancia Delta HF Integrale. Polo looks mean and it looks eager, and I cannot wait to see it face that WRC car of all WRC cars, Citroën. Just to note, I personally hate Volkswagen road cars, I find them utterly boring and I laugh at them for being so conservative (then they laugh back at me, or rather at my oh-so-full-of-character French car and it’s non existent reliabilty and build quality); but as much as modern day Volkswagens are as exciting as tax form, I find Polo to be extremely well designed and it just plays all the right tunes for me. So thrilled it evolved into full blown WRC monster.

It’s such a shame Ford scrambled out of WRC and I still cannot help but feel they did it to avoid piling up new expenses while risking to be beaten not only by Citroën but by Volkswagen as well. It is terribly wrong it had to end like this and I am pretty upset over all the mistakes Jari-Matti Latvala and Petter Solberg delivered in 2012 instead of results and points. It was a situation not even Malcolm Wilson could fix.

But, Ford is still not entirely out of the picture, and what we can now look forward to is a good season with plenty of media interest and solid TV coverage. And hope this could rekindle love for WRC not only in Ford but in other manufacturers as well.