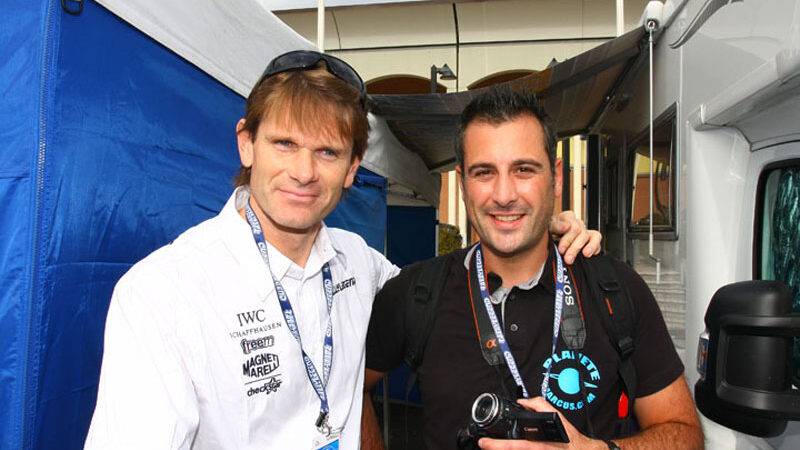 Anyone remotely familiar with WRC and Internet probably ran into this man’s work – photos and videos from WRC events and test sessions or countless tweets, always bringing latest news and very relevant links to photos, videos and basically anything that is in any way related to World Rally Championship from various sources all over the interwebs. Over the years his name became sort of a WRC trade mark, and his website and Twitter handle are recognized for speedy delivery of information, lot of detailed info about each round of the WRC and for the huge passion of the man behind it. His name is Jérémie Billiot, but I am pretty sure he is better known as Planetemarcus.

I was pretty curious about this guy – how does he manage to get all this info and deliver so many tweets, always bringing you absolute latest from the world of WRC? Is he some kind of superhuman, new generation of rally fan, or just a very involved enthusiast with severe case of rally fever. I decided to ask him for an interview and learned that he is also very kind. Despite all the holiday celebrations and first round of European Rally Championship, Jérémie devoted some of his time to sit down and respond to my questions.

You can see Jérémie’s replies below. If you ever run into him on some WRC event, do let him know just how much appreciation WRC community has for him. Seriously Jérémie, I’d ask you for autograph!

Now, take a few minutes off and read this interview. Then check your Twitter and I am quite sure you’ll find few posts by Planetemarcus, with fresh batch of WRC news.

First of all, can you tell me a bit about yourself – in as many (or little) words as you like – what do you do for living and where do you live?

Hi Tom & World Rally Blog! I’m Jérémie from Dijon (Burgundy) in France. I am 36 and I work as a business controller. I am also married and a father to one boy! On my website www.planetemarcus.com I am webmaster and video reporter. This site is active since 2004.

How did you fall in love with rallying and when?

It was in the 1990s that I went to see some regional rally close to my house with my friend – it wasn’t really anything amazing, just some rally. I preferred NBA basketball and was a really big fan back then, but it was quite difficult to follow that sport because Internet did not exist, so information was not as readily available. Then, in 2001 or 2002 it happened – I was in a supermarket when I read a newspaper with Marcus Grönholm, the 2002 World Champion. That was the spark that got me hooked and I fell in love with rally. In 2003 my wife and I decided to travel to Rally Deutschland in August, that was my first WRC event!

What sets rally apart from other forms of motorsport in your opinion? Why did you choose rally and not Formula 1?

Many reasons that combine into one great experience: traveling, looking for a nice spectator spot, reading the maps, spending time outdoors, meeting rally drivers… these are the main reasons behind my love for this sport and everything around it.

I guess the name of your website and Twitter profile says a lot about who is your favourite driver. Why Marcus Gronholm?

I like rally as a motorsport discipline, sure, but I especially like and respect Marcus’ work. Why? Maybe because he won 2 titles in the early 2000s, but for sure, his style of driving and his kindness are also the reason why I, and many others, have so much respect for Marcus!

Your followers on Twitter can be sure that you will be the first to deliver all the images, videos and other relevant links about almost anything and everything concerning rally. Is it a lot of work? How many sources do you have?

With new technology, smartphones and Twitter, you can write very fast now and get many information quickly. It’s not that much work I would say, but read some forums and of course follow Twitter!

How would you improve rally presentation to global audience? Do you think WRC should be more involved with social media (Twitter, Facebook…) and not only the conventional TV and online news distribution?

I think yes. The wrc.com website is good support to the series, but more news through Twitter and Facebook could improve things considerably. I am not sure how needed that is at this moment. I hope RedBull’s efforts in 2013 will put WRC in good position again.

How often do you travel to WRC events and which ones did you visit so far?

Since 2003 I visited 18 WRC events. I remember all of them, of course! There were 6 Monte Carlo Rallies (soon to be 7!), 5 Deutschland Rallys, 1 Rally Finland, 1 Greece, 1 Spain, 1 Ireland and 3 French rounds of the WRC! Every single one was nice and unique experience. The best so far was Finland! High speed and great spectating spot, it was impressive!

There must be funny or odd anecdotes from those events, can you tell me one such anecdote?

One of the best memory was the Test Days of Marcus in 2009, when he returned to WRC after retirement at WRC rally in Portugal! It was two days inside the team Prodrive, and really amazing to eat with Marcus, and speak about Impreza rally car. That was very nice. The second best memory was in 2005, again with Marcus when he tested for Deutschland Rally – I was able to enter his motorhome and speak with him! And maybe the 1st big memory was Finland 2008, to be invited at Ford Motorhome during the rally at Jyvaskyla by Timo Rautiainen! Great memories!

What should WRC do in order to bring more atmosphere from the stages to TV reports?

Easy thing to do: more live stages during the rally, with for example Eyes of the Sky, as they did on some event in 2008 I think? Eurosport did this, in 2012 Monte Carlo, with interviews at final stage…

How important is to have a WRC radio?

It is very important for the WRC and rally in general to be able to feel the WRC atmosphere. Rebecca Williams and Colin clark are perfect for this job! Too amazing to hear Colin speak at the radio!

Sebastien Loeb will do only couple of rallies, and there is new team in WRC for next year. Who do you think has the best chance of winning the 2013 title?

I believe Mikko Hirvonen has the best chance in 2013! He’s fast and reliable. But I also hope for some good results and even victories from Volkswagen team!

Given equal cars and resources, do you think Sebastien Ogier could consistently be faster than Sebastien Loeb?

Yes no doubt! He prove it in 2011 season with some rally experience. In 2013, if Polo WRC is reliable and competitive, he could be making some good results and maybe some wins!

Which rally car would you like to have delivered to you for your next birthday?

Which WRC event would you like to visit the most in future?

Sweden is a beautiful rally, but too cold… New Zealand is beautiful but too far away lol… So the best for 2013 could be Sardegna!

Francois Delecour or Gilles Panizzi? And why?

Difficult choice, because these 2 rally drivers take the same crazy feeling to win and to be fast… but maybe Delecour is my choice, because he is still really fast and he is back to the rally nowadays!

Do you have any other hobbies or interests except rally? And how do you handle those? For me I think you’re 100% in rally!

Rally is my principal hobby, but I also like cinema, music…

My plan is Test Days but don’t know where and when. Out of WRC events, Rally Monte Carlo for sure, hopefully Sardegna and maybe Wales. We’ll see.

I have to ask – do you have any first hand experience of driving or co-driving and if you do, when was it? If not, do you plan to?

No experience of driving, for the moment I don’t have any plans for this.

Have you ever “driven” any of the PC or PlayStation rally games and if so, which is your favourite?

Yes of course, since a long time, with Colin Mc Rae series, over Richard Burns Rally to recent WRC 3 with PS3 and wheel.

Thank you very much for taking the time to go through these questions and provide replies!

Happy you have proposed this interview! Thanks for this!