Big job ahead for Volkswagen, and they’re ready! (+ TV schedule)

All eyes are on Volkswagen now, despite other teams also making their way to Monte Carlo and preparing for first recce runs in next few days. German automobile giant will make it’s first competitive steps next week, with a brand new car and strong lineup. Sebastien Ogier and Jari-Matti Latvala will set off to test the strength of their team after long year of development. And naturally, everyone is beyond curious to see how this project will turn out and just how fast Volkswagen really is.

It’s interesting how different people have different opinions on Volkswagen’s chances this year. Some are ambitious and say German team could pull a big surprise, others are a bit more cautious. Regardless if Volkswagen duo ends up on podium or in a service park, looking at the broken <insert random rally car part/component>, I have no doubt they are here to do the job properly and will not be scared off by possible difficult start or initial lack of pace.

I like to judge just how serious and big teams are in their thinking by looking at the media material they prepare ahead of each WRC round. Big, well organized teams have equally well designed and maintained websites, and media & fans are treated as integral part of the experience. Just by looking at Volkswagen’s huge press release & preview of Rallye Monte Carlo I must say I am really impressed. They do have something to say, and they do know how to say it. And for sure, they know people are ready to hear them!

But, let’s not get carried away with just how much Volkswagen can talk. For now, length of PR material still does not earn WRC points, so let’s leave it to Seb Ogier and Jari-Matti Latvala to do the actual talking where it counts, on stage.

Check below for some excellent reading about Volkswagen’s preparations, Q&A session with team boss and even TV Schedule for Rallye Monte Carlo.

The stage is set: Volkswagen Polo R WRC makes its debut at the Rally Monte Carlo

When the first World Rally Car sets out on the opening stage of the Rally Monte Carlo, from Moulinon to Antraigues, at 09:00 on Wednesday 16 January, it will mark the start of something rather special: Volkswagen’s first season in the FIA World Rally Championship (WRC). 20,000 kilometres of testing, 1,700 parts designed completely from scratch, 17 months of preparations – all for this one moment, the dawn of a new age. The appearance of the Polo R WRC in the FIA World Rally Championship heralds a new era in motorsport for Volkswagen – and where better to make your debut than the legendary Rally Monte Carlo. In Jari-Matti Latvala/Miikka Anttila (FIN/FIN) and Sébastien Ogier/Julien Ingrassia (F/F), the works team from Wolfsburg lines up at the WRC season-opener with two young crews who nevertheless already possess a wealth of experience. From 15 to 20 January, Volkswagen will face strong opponents and a new technological challenge. The WRC is regarded as the biggest all-round test in international motorsport and, alongside Formula One, it is the most iconic of the FIA’s world championships.

“I cannot wait to finally getting going. The entire team at Volkswagen is looking forward to the WRC debut of the Polo WRC,” says Volkswagen Motorsport Director Jost Capito. “World Championship rallies in the top WRC class are new territory for the team. Furthermore, the Polo R WRC has been developed from scratch, features a lot of innovative ideas, and will be making its competitive debut. The ‘Monte’ will give us our first indication of how we compare with the opposition – our rivals already have two years’ experience of the regulations that came into force in 2011, and have been driving in the WRC for many years. Our goal for the Rally Monte Carlo is to gain as much experience as possible and to finish with both cars.”

The Rally Monte Carlo is a first for Volkswagen in many regards: the team is competing at a World Championship rally in the top category for World Rally Cars. At the same time, the Polo R WRC will make its first competitive outing and the team will be working with a new driving duo for the first time under rally conditions. Finn Jari-Matti Latvala and his compatriot and co-driver Miikka Anttila officially joined the Volkswagen outfit at the start of the year. Prior to their appearance at the “Monte”, the duo with seven WRC wins to their name have completed a number of test drives.

Latvala and Anttila start the 2013 season in the number 7 Polo R WRC. In the cockpit of the number 8 Polo will be Frenchmen Sébastien Ogier and his co-driver Julien Ingrassia. They have been under contract as Volkswagen works drivers since the end of 2011 and have played significant roles in the development and testing of the Polo R WRC. Together with co-driver Ingrassia, Ogier, who was born in Gap (F), has already won his home rally on one occasion. In 2009 the French pair won the classic as guest starters in the Intercontinental Rally Challenge (IRC). Like Latvala and Anttila, Ogier and Ingrassia currently have seven WRC race wins to their name.

Simply legendary: the “Monte” challenge in the snow and ice of the mountains

The Volkswagen Motorsport team could hardly be facing a tougher challenge. After all, the “Monte” is the oldest rally in the world and the “mother of all rallies”, having been held for the first time in 1911. The majority of the Rally Monte Carlo is held on narrow tarmacked roads in the French Maritime Alps to the north of the principality of Monaco. While the lower roads close to the Mediterranean are regularly dry, the drivers are often faced with black ice and snow on the many mountain passes they are required to negotiate. This makes it essential to select the right tyre – and makes the “Monte” one of the most difficult and complex rallies on the World Championship calendar. 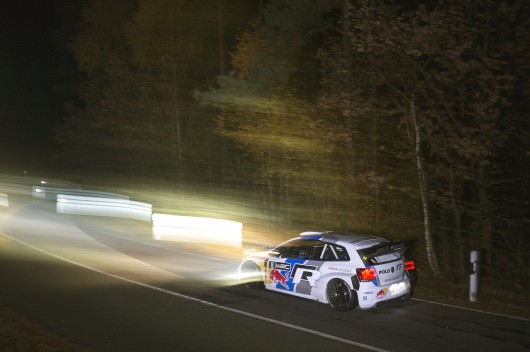 Thoughts ahead of the Rally Monte Carlo

Jari-Matti Latvala, Polo R WRC #7
“I can hardly wait for the season to get started. I may already have five years as a works driver in the World Rally Championship under my belt, but both the Volkswagen Motorsport team and the Polo R WRC are new to me. As such, I will be making my debut in two regards. The tests up to now have shown that the Polo R WRC is very reliable. This is probably the most important finding so far – and a good basis for future technical developments over the course of the season. I have already developed a good feeling for the car on asphalt and snow, which is a good sign ahead of the Rally Monte Carlo. It is great fun driving the Polo R WRC. It is very stable and the driveability of the engine is also very good. I would like to get the season off to a good start at the ‘Monte’. The result is not the top priority yet, although I would obviously love to pick up some World Championship points.”

Sébastien Ogier, Polo R WRC #8
“The ‘Monte’ is a very special rally. After all, it is my home rally. However, the season-opener near my home will be an extraordinary experience for the entire team, as it is the first rally with the new Polo R WRC. We have been working towards this moment with Volkswagen for over a year. We can hardly wait to finally get started. However, it is difficult to judge how we will compare to the opposition, as we have not yet raced against the other teams under competitive conditions. Making your debut in a world championship with a completely new car is a big challenge, particularly as the other manufacturers have several years more experience than we do. For this reason we must be patient and concentrate at first on reaching the finish without any problems. Experience shows that this is anything but simple at the Rally Monte Carlo, as anything can happen at this event.”

The start in the FIA World Rally Championship (WRC) sees Volkswagen continue its successful history in motorsport. Volkswagen claimed overall victory at the Rally Dakar in 2009, 2010 and 2011 with the Race Touareg to claim a hat-trick of titles at the toughest marathon rally in the world. The Polo R WRC is the first World Rally Car to come out of Wolfsburg, with the manufacturer now entering its own works team at the pinnacle of rallying for the first time. This presents Volkswagen with the opportunity to prove itself in direct sporting competition on a global stage. No model is more suited to the challenge than the Polo, which is one of Volkswagen’s most internationally manufactured and distributed cars.

If you could have chosen a rally for the Polo R WRC to make its debut at – would you have taken the Rally Monte Carlo?
Jost Capito: “The Rally Monte Carlo is not only the most iconic rally on the World Championship calendar, but also the most difficult and complex. The surface alternates regularly between ice, snow, rain and dry asphalt, which can make the strategy difficult and tyre selection something of a lottery. We are obviously delighted that the Polo R WRC will make its debut at this highlight.”

In Sébastien Ogier and Jari-Matti Latvala you have signed two very quick drivers. Who do you feel is the stronger?
Jost Capito: “They are both equally strong. As a Scandinavian, Latvala grew up on gravel – however, he has made huge progress on asphalt in recent years. The same applies to Ogier, who also has what it takes to win on any surface. Both have seven WRC wins to their name. In the end it will come down to who performs best on the day to determine who is the quickest.”

What goals does Volkswagen have for the 2013 season?
Jost Capito: “We are aware that we will be up against strong opposition with decades of World Rally Championship experience. The Polo R WRC, on the other hand, is making its debut this year and the team also has a new look to it. As such, we have to set realistic goals. We want to make it onto the podium under our own steam in the second half of the year.”