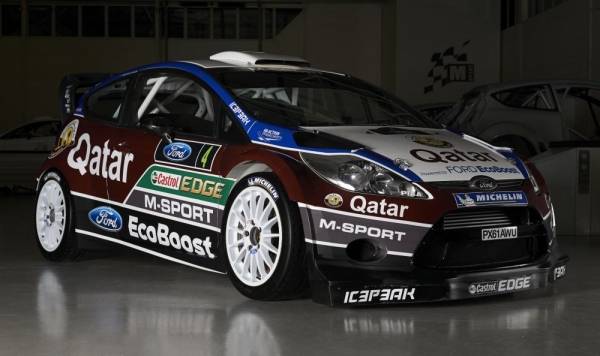 Qatar M-Sport World Rally Team’s Ford Fiesta RS WRC was on display at the UK’s traditional start to the motorsport season at the Autosport International Racing Car Show in Birmingham today as the team revealed the livery of their new challenger for the 2013 FIA World Rally Championship (WRC).

Unveiled in association with Castrol EDGE, the new design was presented to the public by M-Sport Managing Director, Malcolm Wilson OBE; Castrol Sponsorship Manager, Donald Smith and the team’s nominated point scorer for all 13 rounds of this season’s championship, Mads Østberg.

Strongly identified by the deep burgundy widely associated with the State of Qatar, the new livery has been designed to be easily recognisable both on and off the stages. The new design also showcases the support of team and trade partners. Castrol EDGE, Michelin and Icepeak are strongly represented as is the Ford Motor Company which will continue to provide technical support throughout the season.

The new-look design will adorn the competition cars of Mads Østberg, Evgeny Novikov, Thierry Neuville and Juho Hänninen as the team makes its competitive debut at Rallye Monte-Carlo next week. Also running the new livery will be the Fiesta RS WRC of Nasser Al-Attiyah who begins his 2013 campaign on the snow-covered stages of Rally Sweden in February.

“The entire team has put a great amount of time and effort into our programme for 2013 and the reveal of the new livery is the result of that commitment. The design reflects the fantastic support we continue to enjoy from our team and trade partners – without whom this would not have been possible. Everyone in the team is looking forward to seeing the car on the stages as well as the new challenges ahead.”