Škoda UK Motorsport: “Does anyone know if next week’s Monte will be shown on UK telly?” 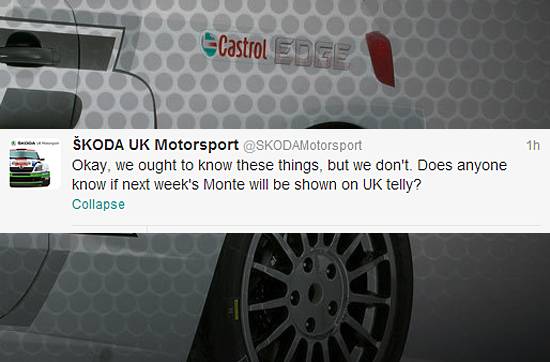 Nothing is official yet, but many different sources claim many different things, with one thing being common – new WRC TV deal is “almost there” and announcement should be “coming soon”. How soon is soon, we do not know.

In their official Monte Carlo preview, Volkswagen revealed TV schedule for, what I presume is, Germany, with Sport 1 and n-TV being the channels to watch for WRC news and reports. Austrian audience will get their fix on Servus TV, while their Czech neighbours can follow Sport 5 programme for WRC updates. Finally, Sport+ is being mentioned for France (thanks to @Slayer1983CH for updates).

Mind you, this is all unofficial and mainly taken from various sources on Twitter. I often assumed big manufacturers (both current and previous) are a bit more involved in the sport and thus can count on being exposed to more up to date information on not-so-public matters. Perhaps that is true, and Volkswagen, Citroën and M-Sport bosses are better informed about the issue of WRC TV, but undoubtedly big names, such as Škoda UK Motorsport are not.

Škoda UK Motorsport tweet was both alarming and very revealing about the matter.

“Okay, we ought to know these things, but we don’t. Does anyone know if next week’s Monte will be shown on UK telly?” Škoda UK said in their recent tweet.

Sure, Škoda is not a WRC team, and as such is not as “important” as current teams and manufacturers are, but don’t forget we’re talking about IRC champions here. Their links and connections are high and wide and if there was any information available, I am quite sure they would be able to get it. Yet, their tweet reveals there is no such information.

All we know for now is the recycled and worn out bit of unofficially sourced info, claiming new deal is being worked on and should be revealed over the next few <insert random time period>. If anyone knows more, well more power to them, but I repeat, all we heard from everyone is same obscure phrase. And nothing else.

Ultimately, I do have faith in WRC, FIA and Red Bull Media House, but zero information and apparent lack of any kind of will to communicate at least something is not very reassuring. Perhaps I do not understand the world of high business, but if the deals are being discussed, aren’t you allowed to say “we’re working on it”?

EDIT: For a list of broadcasters showing WRC in 2013 visit this page on WRC’s official website www.wrc.com