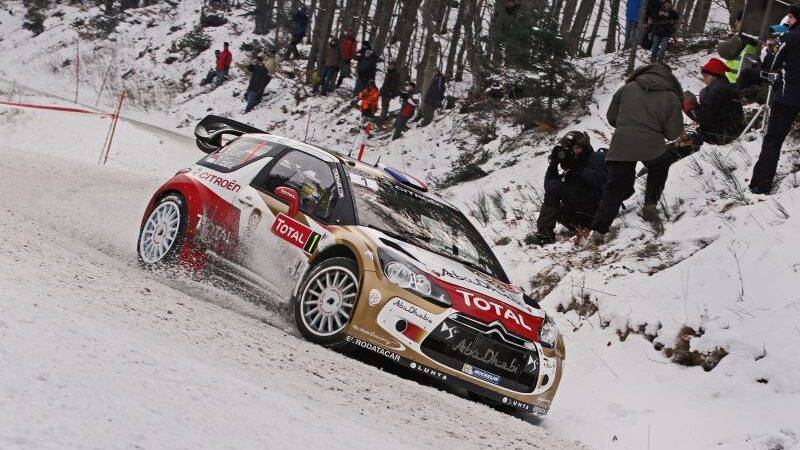 First day of proper rally action is behind us, and what a day it was! Only four stages, but huge amount of excitement, with a bit of drama as well. Some of the classic Monte stages challenged crews and their teams to the maximum, with tires once again playing crucial part in shaping the outcome of day 1 of Rally Monte Carlo.

Sebastien Loeb stormed the stages today, but it was compatriot and (former) arch rival Sebastien Ogier that set the first benchmark of the season by winning the 1st special stage for Volkswagen. Amazing effort and one that brought smiles on everyone’s faces – it’s a sign of a strong team. Soon, however, it was back to business for everyone, and it wasn’t long before Loeb started building his advantage after taking the lead on SS 2.

Perhaps Loeb is really driving for fun and he certainly can afford to push a bit harder than the rest of the grid – with only four events this year, Seb does not really need to worry about the points and positions. On the other hand, Ogier and others need to be very careful. There is no Rally 2 in Monte Carlo, and every point counts in the end. Whether playing it safe had anything to do with the fact that Loeb was so in front of everybody else, it’s hard to say. But he can afford to push, and can just brush off any moment or a spin, while others see those as serious wake-up calls. After all, it’s just the first day of the rally – it’s still a long way to go.

Jari-Matti Latvala and Mikko Hirvonen had a slower start this morning, further “helped” by Latvala’s penalty for checking in too late for SS2, but both managed to up the pace on the second run. At the end of the day, Hirvonen finished in third place ahead of Dani Sordo, while Latvala completed the top five.

Superb day of rallying was spoiled by late and costly spin for Juho Hanninen. The reigning European rally champion was quickest of the “Ford” drivers after first loop of stages, but eventually dropped to distant 9th place after the spin on the last stage of the day. Thierry Neuville had a lot less luck – he retired due to broken suspension, once again failing to reach the finish of the first rally of the season.

Great thing about today is that it brought many challenges and required very calculated approach, but at the same time we had a chance to see Volkswagen’s pace. Ultimately, it’s great that so-called second or inexperienced drivers were very competitive, and there were no clear favourite. Except for Loeb and perhaps Ogier.

But we somehow knew these two would be at least a bit ahead of the field.

Day 1 saw many communication and timing problems for organizers and FIA’s new partners, prompting questions about the level of preparation and dedication these teams have.