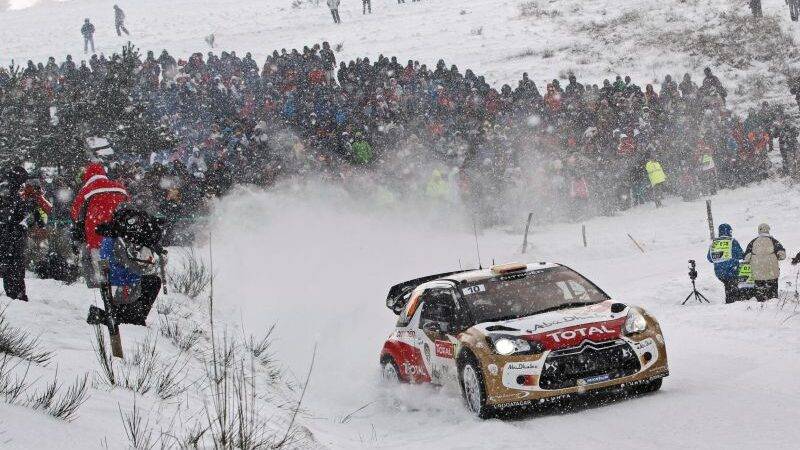 Such a rally, what a day, again! Sebastien Loeb is so far in front that not even Sebastien Ogier cares about him anymore. In fact, if you ask Ogier about Loeb just one more time, he will… he will… do something! Oui! I do feel sorry for Mr. Ogier to some extent – faced with reporters he probably hoped they will ask him about the car, the pace, the expectations… perhaps even go all George Donaldson on him and go into tiny technical details, but no! No, no, no! All he got was Loeb. Loeb! “Yes, he is in front, but I don’t care about Loeb! He is not in championship”, Ogier tried reasoning with reporters, but no luck. Ultimately, he stopped responding to Loeb questions. Quite rightly so.

Loeb may get points, and Ogier should maybe be after those extra points, as Dan Prosser suggested today on Twitter. But, Loeb also can drive his heart out and push like he never pushed before, for he can afford to lose each and every point if he crashes. He can because he is here just to have some “fun” (mandatory read in Seb’s voice) and provide best show possible. And also steal points from Volkswagen. Because I somehow think Citroën was very well aware of Volkswagen’s potential before the season went underway. Is this the first conspiracy of 2013? You did not hear it from me! But whatever the motivation behind Loeb’s participation, Ogier has much more serious agenda – one that values second place more than heroic chase finished with Latvalish or Solbergesque crash. Sebastien Ogier did not hastily rush to prove everyone he is quick and better than everyone, which would surely earn him some temporary ovations, but those are of little value if you finish your rally looking at the underside of your overturned rally machine.

Another hero well worth mentioning today is Juho Hanninen. Such a character, I would even say he is more old-school Finn than two quick fliers Jari-Matti Latvala and Mikko Hirvonen are. Old-school in driving terms of course – he is still teenishly fast and knows his stuff. First WRC stage win brought big smile on his face, as he humbly commented: “I need more time with this car. It has so much potential!”

Finally, Ilka Minor, Francois Delecour and Denis Giraudet. Such heroes! You can cut experience radiating from these three with a knife, and it’s the exact amount of experience and authority that is needed to wield such powerful yet not very under control weapon which is Evgeny Novikov. Young Russian is driving very controlled yet also very well paced rally, as Dani Sordo can confirm.

At the end, let me say that surprise is equally strong, but somewhat on a gray side, with Latvala and Mikko Hirvonen. And while Jari-Matti is getting used to new car, Mikko’s lack of pace is a bit strange really. That’s not saying that conditions out there are anything but supertough. Did I say that right, or I just made a complete tool out of myself?

Love the Monte so far, even the timing systems were in much better shape today. Oh, and… AND… we even got a brief yet very welcome video report of first loop published on Youtube by WRC. Great! As James Graham of Sideways Magazine would say: “It takes so little to win us over”, yes it does – because it really is the little things that make HUGE difference. Biggest of which is the knowledge that They hear Us and acknowledge our opinions.