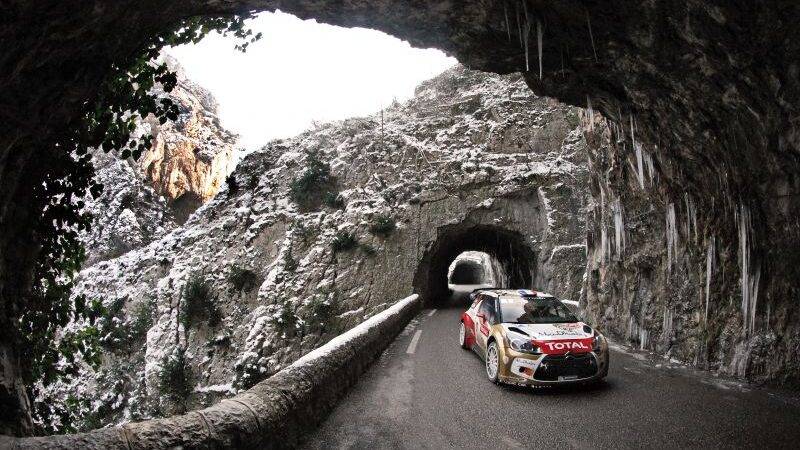 Would you like some black ice and a sprinkle of snow on that dry tarmac, or shall we add some moist in couple of corners, just to round it up nicely? Yes, by all means!, fans and reporters shouted in response. Drivers were quiet, or at least we think they were, because they were behind thick glass wall and apart from some wild gestures and arms waving, there was no sound coming from their direction. And so it happened, Rallye Monte Carlo delivered the package as promised, the classy classic in it’s classiest of class. For sure, “classic” is the most commonly used word these days in every conversation dealing with this legendary event. It’s right there at the top, basking in it’s glory, together with “tyres”, “studs” and finally those timeless classics (hey, here it is again!), “tricky” and “for sure”.

But what about drivers? Well, drivers really have no say in this. They are payed to work, and their job is to drive, and not to have fun. Therefore they can complain about tough conditions and tricky sections all they like, but we will have none of it. And if they show even the slightest hint of satisfaction at the end of the special stage, we should just dismiss it as good acting. Because we know, there is no chance they could ever be having fun driving a rally car on a Rallye Monte Carlo classiest of classic special stages, right?

Truth is, we know they’re having fun, and we like it, because this is how this sport works. But what we like even more is for conditions to be really, really challenging and, dare I say it, tricky, just to help separate boys from men, to let us see who is instantly fast and quick to adapt, and who is still not quite there yet. And deep down, drivers thrive in such conditions as well, they secretly love it, perhaps they curse it with big passion on stages, and maybe they toss “shit” and “merde” into reporters microphones at the stage ends, but when they retreat to their hotel rooms, and right before they succumb to well deserved slumber, they allow themselves to feel full and total happiness over the job they’re doing and the challenges they are boldly accepting.

Today saw crews tackle one of the Alpine classic classiest of classic stages, the magical Sisteron. Seriously, just look at those alien cliffs towering about that town, such place surely cannot have normal special stage. And it wasn’t. It was tarmac, wet, moist, with black ice and a bit of snow… rainbow nightmare, all in one. Oddly enough, such conditions were obviously just the perfect setting for Jari-Matti Latvala, who finally managed to exchange some friendly words with his car, and put some solid performance on time sheets. At the same time, Mikko Hirvonen is still trying to wrestle his way around stages, in a bit of a cold start to his 2013 campaign.

Job of the day title once again goes to young Evgeny Novikov. Controlled, quick and calm, he is total opposite of former self, and he saw his chance to snatch third place from Dani Sordo when Spaniard made a rare mistake, spinning in one of the today’s stages. Well done, Evgeny, and keep it up. Sordo was able to push on the Sisteron stage and reduce the gap to just 1.7 seconds, so tomorrow we’re in for a real battle for the bronze.

At the top, Sebastien Loeb is keeping things under control, avoiding risks and doing what needs to be done to maintain lead and keep himself out of trouble. Which is exactly what his namesake, compatriot and big fan Sebastien Ogier is doing in second place. Ogier had some scares with stalls in the last stage, but no major drama and Volkswagen is firmly set for a podium finish.

While Thierry Neuville is safely home in Belgium and tweets about how sorry he is not to be able to continue (reminder: his rally ended on 1st day with a too ambitious cut damaged the suspension on QWRT Fiesta), his co-driver is busy helping the team for the remainder of the event. I admit, I do not know if Thierry had some personal reasons to return home after retiring from rally, and is this what most drivers do, but I always thought drivers remain with their teams, and/or go out to stages and spectate, talk to fans… you know, enjoy the rally. Not just pack up and go home. How do you go home, when there is Rallye Monte Carlo going on?

Finally, big round of applause go to another Qatar World Rally Team youngster, Mads Ostberg, for claiming the 12th special stage. Great effort and nice boost to young Norwegian’s confidence, no doubt. Ultimately, WRC Live crew did good job once again with their radio coverage, especially the “toe and camber” man, George Donaldson. He should really try and secure more time with crews at stage ends, just to be able to properly inspect and interview the cars as well. With microphone in one hand and wrench in the other.

After few days in Valence, crews and teams are on their way to Monte Carlo, for tomorrow’s final leg and the remaining five special stages and plenty of competitive kilometers. Just looking at the names of those stages gets my blood pumping. And I am not even there.