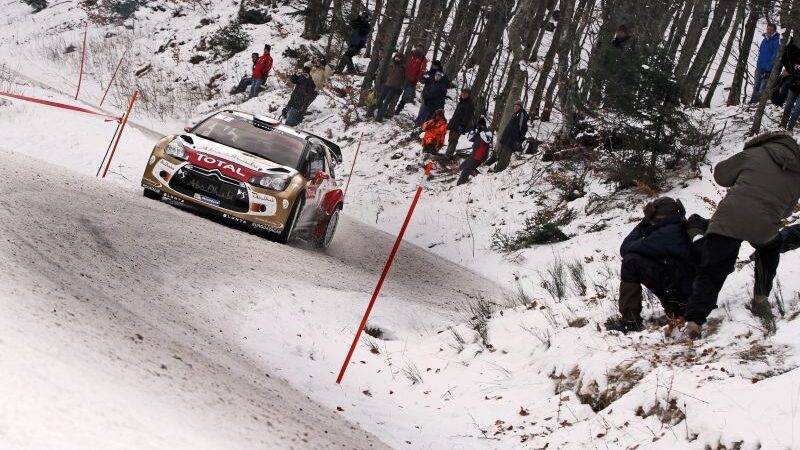 Given the complex and tricky conditions in Rallye Monte Carlo, one could say Citroën Racing was able to score a perfect finish – Sebastien Loeb and Daniel Elena clinched a convincing win and Dani Sordo, co-driven by Carlos del Barrio, snatched third place after very solid performance on difficult mountain stages north of Monte Carlo. It was a strong start of the 2013 season, but again, we expected no less from the team. It’s Citroën after all, the synonym for reliability and speed, at least when WRC is concerned. Of course, it also helps to have a Sebastien Loeb on board – with him out of the picture, victory in Monte Carlo would be Volkswagen’s!

But that was then, and this is now, almost. Rally Sweden is upon us, and once again Sebastien Loeb will be setting the pace, on first day of the rally at least. He wanted to visit Sweden once again, there is some unfinished business between nine-times World Rally Champion and the fast and demanding tracks in the frozen wastelands of Sweden. As much as Seb tries to explain his decision, we simply cannot get it – it’s heroic mission, it’s champion’s call, it’s about accepting and beating the challenges unknown to the rest of us. Oddly enough, Loeb is not seen as hot favourite for triumph in the snow, and that could be nice little advantage, combined with the fact that he can, again, push a bit harder than the rest of the WRC regulars, because who cares about points, eh, he is actually retired!

Favourite or not, and of course he is, Loeb and the rest of the Citroën gang will have a nice little job to do in Sweden. Reports claim there is enough snow and ice on stages, and the competition will be fierce with capital F. Can Citroën’s Scandinavian hero finally step out of the shadows and add another victory to his tally? It would be good to beat at least Dani Sordo in the snow, right Mr. Hirvonen?

After a snow-covered Monte-Carlo rally, the World Rally Championship competitors must now brace themselves for the coldest round of the year. Studded tyres will be the order of the day on the frozen roads of Sweden and Norway for one of the season’s most spectacular rallies.

Two-time winners of the Scandinavian event, Mikko Hirvonen and Jarmo Lehtinen will be determined to come away with a strong result at one their favourite rallies. Competing on behalf of the Citroën Total Abu Dhabi WRT, Sébastien Loeb and Daniel Elena will not however be content to make up their numbers! This round will see Khalid Al Qassimi and Scott Martin make their competitive debut in the DS3 WRC of the Abu Dhabi Citroën Total WRT. Dani Sordo and Carlos del Barrio will also be competing for Citroën Racing in a fourth car.

Even if you don’t speak Finnish fluently, on-board camera footage of Mikko Hirvonen at Rally Sweden is nonetheless compelling viewing. Totally unflappable, Jarmo Lehtinen calls out the pace notes at a rate of knots, while his driver controls the DS3 WRC as it flies from one jump to the next… at speeds approaching 180kph! In a few days time, fans of the World Rally Championship will be able to admire their idols on stages that sometimes look more like a bobsleigh track!

After winning here in 2010 and 2011, the Citroën Total Abu Dhabi World Rally Team crew will be very determined to claim another victory in Karlstad. “Since we finished Monte-Carlo, I have been totally focussed on this rally,” confirmed Mikko. “Last year, it was only my second rally in the DS3 WRC and I was missing that little something you need to grab the win. A year later, I feel ready to secure my first win in 2013. Obviously, we’ll have to deal with the conditions, which can vary depending on how cold it gets and any snowfall. That can affect the wear of the tyres. The new Michelin X-Ice North tyres seem more hard-wearing on the frozen gravel, but we’ll only really be able to tell in the race!”

Winners of the opening round of the season, Sébastien Loeb and Daniel Elena continue their partial racing programme with Rally Sweden. The only ‘non-Nordic’ crew to have won here, the nine-time World Champions would dearly love to repeat the feat. “I remember how surprised Yves Matton was when I suggested including this rally in my programme,” recalled Seb. “It is undoubtedly not one of the rallies where I have enjoyed the most success in recent years, but that’s exactly why I’m keen to compete here. To be honest, our win here in 2004 wasn’t a particularly great race. We won mainly because the other guys ran into problems. Since then I have been trying to understand and master these stages. So, I am here one final time to try and go out in style!”

Two weeks after finishing as runner-up in the Qatar Rally, the opening round of the Middle East Rally Championship, Khalid Al Qassimi and Scott Martin are set to radically change their surroundings as they head for the county of Värmland. Nominated to score points for the Abu Dhabi Citroën Total WRT, the Emirati driver will be taking part in his fourth Rally Sweden: “No, it’s not really a surface that comes naturally to me, but I have improved here every year, so much so that I finished in the points last time I competed in 2011. This will be my first rally with the team and the DS3 WRC, so I don’t want to set myself too high a target. It would be a great start if I could finish in the points.”

Third overall in Monte-Carlo, Dani Sordo and Carlos del Barrio will be the extra Citroën crew at this rally. Like all the drivers who do not come from Northern Europe, the Spaniard has become increasingly accustomed to the surface the more he has competed here. “Although I still think I can improve further on this surface, I was on the pace in 2010 when I finished on the podium,” recalled Dani. “My goal for this rally is very simply to produce the best possible result. The fact that I won’t be scoring points towards the Manufacturers’ Championship will help to take the pressure off me.”