Sebastien Ogier is on the mission in Sweden

Dear everyone who took Volskwagen’s pre-season comments and interviews too seriously – they were only kidding! I find it impossible they did not have a pretty good idea on what their pace might be in real rally situation, but sure enough, it’s much wiser to be overly careful and realistic, than to come in bragging and shouting. After Monte Carlo and one full day of Rally Sweden we can draw some solid conclusions, and one of those is – Volkswagen is fast! And by fast, I mean rally winning fast. It is very evident they have what it takes to challenge Citroën and Qatar MWRT. Which is splendid for the sport, it’s good beyond words. Seeing how intense and fun the fight between two Sebastien is, aren’t you also sorry that older of the two will not be doing full season this year.

Sebastien Ogier is in the league of his own it seems. He wasn’t fastest on all stages, but he was consistently faster than anyone else and the end result is 31.4 second advantage over Sebastien Loeb going into day 2 of the rally. What an achievement, made even more impressive by the fact that it was done on snow and ice. Ogier is just pure class so far this year – he is doing great job of controlling his ambitions and speed, and I am glad to see my pre-season worries were unfounded. He is not trying too hard and he’s not interested in proving points at any cost. Instead, he is driving like the champion he will undoubtedly be at some point. Needless to say, having a perfectly setup car helps, and Ogier had nothing but praises for his 2013 machine today.

Second placed Sebastien Loeb is pushing hard, no doubt about that. He is too experienced to be pushing too hard, and half a minute gap would take some serious risk taking if he was to challenge Ogier. At the same time, he did something very classy, praising his younger compatriot. “Ogier and his Polo are very fast today, I’m not sure why we’re not able to match their pace, we’ll see if there is anything we can do”, Loeb said at the end of the final stage. Well, sure, it wasn’t an outright praise, but hey, it’s Loeb and Ogier we’re talking about, and during rally, don’t expect too much! Half a minute is simply too much to make up by just driving, but you can be sure Loeb will try and stay close to his former team mate and forever friend Ogier. Just to inherit the lead and defend the honour of France in case Volkswagen pilot makes a mistake, of course! 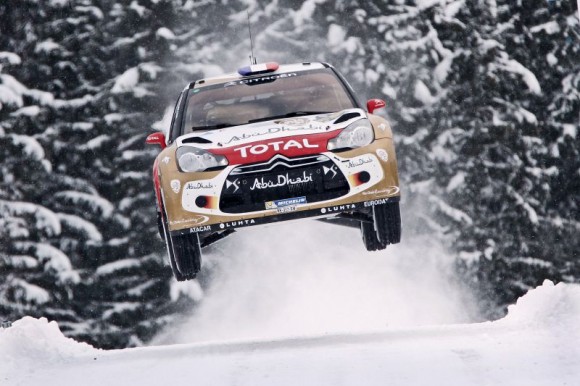 But Loeb would do better to pay attention to another raging Volkswagen of Jari-Matti Latvala. Finnish driver is doing a much better job than in Monte Carlo. After all, it’s snow and ice, he should know a thing or two about those, right? Very confident and steadily improving stage by stage, Latvala is also being forced to observe his rear view mirrors now and then, just to check what young Mads Ostberg is doing. Because, 1.7 seconds gap to Loeb may sound like great idea for attack, but Ostberg is just 9.2 seconds behind. What a rally!

Major problems for Mikko Hirvonen today. Citroën’s driver crashed out and rolled, losing huge chunk of time, and is now well down the order in overall standings. He does have the pace and would be maybe right up there with French duo and Jari-Matti, but alas. Frustrating season continues for the Finn.

Contrary to Hirvonen, mighty impressive on day 1 proper was Pontus Tidemand, who is currently 6th overall, and is keeping Evgeny Novikov busy with just 10 seconds separating the two. Behind Tidemand, Juho Hanninen is being chased by Thierry Neuville – can you imagine more perfect setup after the first day.