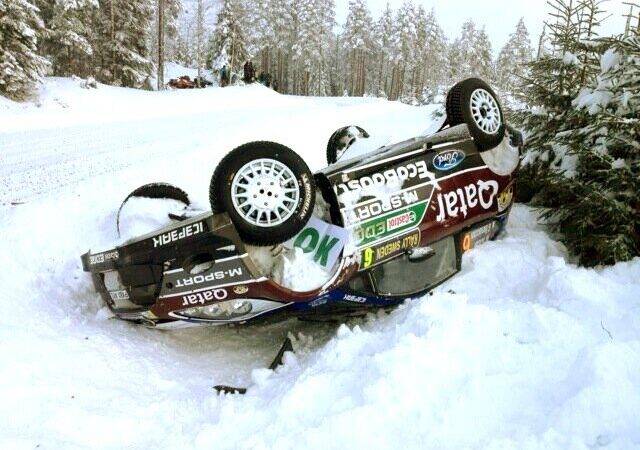 Nasser Al-Attiyah was not able to compete in Sweden and Qatar M-Sport World Rally Team picked Matthew Wilson to take Nasser’s spot for Sweden. Apparently, there were no other valid options at that time, and it was a very short notice. With a new co-driver (Giovanni Bernacchini, Nasser’s co-driver) and without any pace notes, Matthew Wilson was not in easiest of positions. But it was a chance many drivers would sell one of their kidneys for – a chance to drive a WRC car in WRC rally.

Wilson wasn’t really competitive nor on pace of the many of the leading or points scoring drivers, before he rolled out on SS 9. Which then started a short but interesting discussion on the idea of giving out drives.

Sweden’s Per-Gunnar Andersson complained on Swedish radio: “I can say I’d have done a much better job in Qatar Fiesta than Matthew Wilson”.

Honestly, at least handfull of drivers came to mind as possible replacements for Nasser Al-Attiyah. From Petter Solberg, to young hopefuls such as Elfyn Evans, perhaps even Kris Meeke, or another of WRC Academy drivers, with or without any proper WRC experience. Again, it was a very short notice, no doubt, and presumably it was easier for M-Sport and Malcolm to come up with in-house solution (no pun intended), but on the other hand, would it be so wrong to give the car to another youngster, as a challenge and a chance to learn a thing or two, short notice or not. Because not everything in life you can plan ahead. Not to mention how many drivers accross many forms of motorsport got their big chances in similar one-off situations. And yet, it was Matthew Wilson who got to drive and roll Qatar Fiesta this time around in Sweden.

“I’d have loved to have seen him [Petter Solberg], or Elfyn Evans, but safe money for no damage, minimum wear, was Matt[hew Wilson]”, argued Colin Clark of WRC live, answering the Iwan Evans’ tweets, in which Iwan said: “Politics, followed by money, has always come before speed”.

I jumped into conversation, saying that cheapest and safest option would be to keep the car at home and not run it at all (which in all honesty would be also the silliest thing to wish for as a rally fan!), prompting Colin to respond: “Nothing like stating the blindingly obvious! Much rather have Matt who is great to watch than a gap in the start list”. Cannot argue with that, but I am more for the solution of giving chances to drivers who are looking to enter WRC.

PG’s comment raised another interesting question: should he be worried about his career and future after making such comments? Should he be? Did he really say something wrong or out of line? For a driver, it’s only normal to claim to be fastest and better than the rest, regardless if it’s Sebastien Loeb or Matthew Wilson on the other side. Should Matthew be protected from any kind of criticism because of his Dad? Surely! If anything, I’d like to praise PG for speaking his mind. Seeing how Matthew managed to secure a ride in Sweden is clear signal to not only PG but others as well. And there is little damage he can do to his career, seeing how he was already overlooked for this particular drive. For Malcolm, M-Sport and Qatar team, it’s their own policy on who they choose to drive their cars, and this is where all discussions end, more or less.