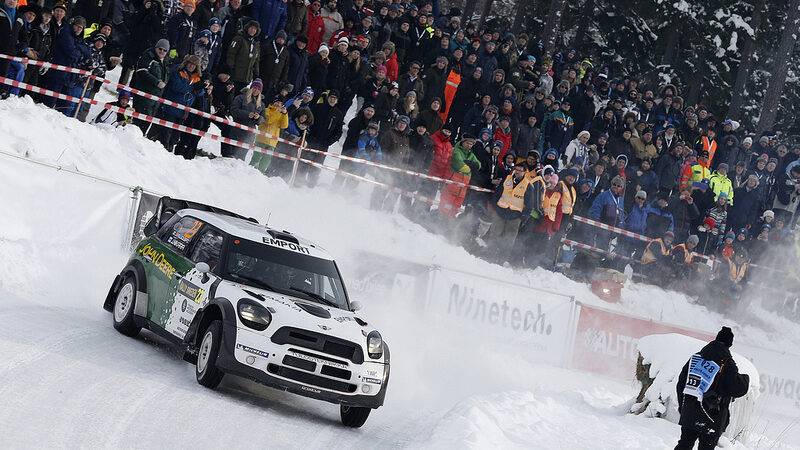 Jarkko Nikara, driving his John Deere-supported MINI John Cooper Works WRC, set three top ten stage times on the final day of Rally Sweden, as he continued to sweep the road for the following drivers. Indeed it would have been four top tens, but for stalling off the line on stage 21, which cost him around ten seconds.

Sweden is only the Finnish driver’s second outing in a World Rally Car, following his amazing fifth place on his debut at Rally Spain in November. Nikara’s poor road position over the weekend hampered his progress. It was initially a consequence of missing qualifying after a high speed accident during free practice, but then he lost 45 minutes in a snow bank on stage three, meaning he was set to sweep the road for the rest of the rally. The highlight of his weekend was his third place on stage 12.

Dave Wilcock, Prodrive WRC Team principal said: “You have to say that Jarkko has driven his first full snow event in a WRC very well. Despite driving on loose snow at the front of the field, he has still been able to demonstrate his raw pace with some excellent splits, while showing maturity to complete all 22 stages. Only the excursion into a snow bank on stage three has cost him a top ten finish, which in a field of this strength, with so many full works drivers with so much testing under their belts would have been quite an achievement. I look forward to seeing him back in the car for Portugal and hopefully some further events. All he needs is time behind the wheel to really show his true potential.”

Jarkko Nikara said: “When the roads were clear and icy the car was really fun to drive, but when there was loose snow on the surface it was much harder for me. I have definitely improved as the event has gone on and I am pleased with my speed and I have learnt the car more and more as I only had 70km of testing before the event. The other guys here have had a lot more time in their cars and they know these stages much better than me, so I am pleased with my performance. I am now looking forward to Portugal. I drove there in 2009 in group N and it is an event I like.”

Nikara will compete for the Prodrive WRC Team at Rally Portugal in April and it is hoped to add further events including Finland.