Upgraded Hyundai i20 WRC in Geneva, love the colours!

For now, Hyundai is keeping a low profile, and it’s coming out with stories about their WRC programme only when they actually have something to say. In the meantime, work goes on in the background, work that is far from spectacular or media worthy (although I would challenge that, I’d be really happy to get a glimpse or two on the inner workings of the brand new team). After rather clumsy start, and those infamous 3rd party “testing” videos, Hyundai Motorsport soon picked up their pace and started building a serious rally team.

Since then we got to see new i20 WRC in it’s first livery, doing some laps for members of the press, while big names started populating team staff roster. It is still unknown who will be driving for Hyundai next year, but I do hope Hyundai decides on a name or two as soon as possible. As we can see from the Sebastien Ogier & Volkswagen case, it is extremely important to have a driver involved with the development of the car from the early stages.

In Geneva, Hyundai revealed new livery for their WRC machine, along with body and mechanical upgrades, mostly focused on cooling efficiency and aerodynamics. In short, car looks stunning, I really like the colour combination and the elaborate stance. Seriously, I am looking forward to seeing this thing out on tracks, and I do hope it will be strong and reliable from the start. Also, if car’s new clothes are anything to go by, I believe Hyundai’s visuals will be match for Volkswagen – can’t wait to see what Hyundai has in store for their website and overall PR assault.

Until then, take a look at what Hyundai Motorsport has to say about the latest incarnation of i20 WRC in official press release below.

Hyundai Motorsport GmbH has taken another significant step towards its forthcoming participation in the FIA World Rally Championship with the unveiling of its latest specification i20 WRC car at the Geneva Motor Show today.

Hyundai is gearing up for its debut season in the challenging FIA World Rally Championship in 2014 with a year of private testing and development as it progresses towards a competition-ready WRC-specification of its i20 model. A first iteration of the car made its debut at the Paris Motor Show back in September but this latest model incorporates notable updates to the exterior bodywork and suspension. The upgrades are the result of collaborative work between Hyundai’s R&D facility in Namyang, Korea and the newly formed Hyundai Motorsport GmbH in Alzenau, Germany, headed up by veteran WRC man Michel Nandan. 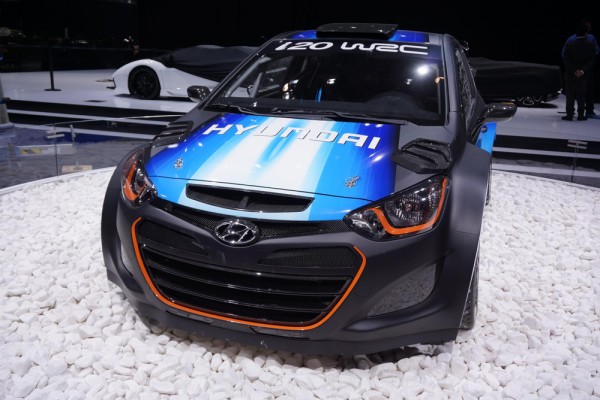 The new specification Hyundai i20 WRC also reveals a striking look thanks to a redesigned livery which blends a dynamic treatment of Hyundai’s corporate blue together with an innovative use of characters from the native Korean script, Hunminjeongeum. The livery matches the excitement and dynamism of WRC with the Korean heritage of the Hyundai brand.

In the two months since his appointment, Team Principal Michel Nandan has focused on establishing the core Hyundai WRC team at the bespoke facility in Alzenau with key technical, logistics and motorsport specialists joining the new manufacturer team. The team will soon be embarking on a more intensive test programme with the i20 WRC to ramp up development of the car ahead of its maiden season. 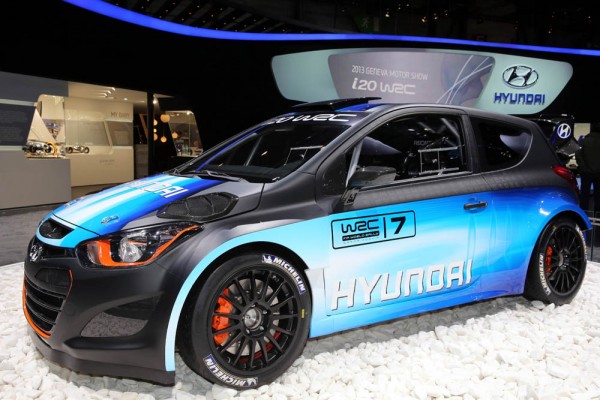 Hyundai Motorsport Team Principal, Michel Nandan commented: “We are still in the infancy of our exciting WRC programme so the development curve for the car and team is steep. This latest version of the i20 WRC have centred on aerodynamics with the objective of improving the car’s cooling systems. A new rear wing and front spoiler give the i20 WRC a new external appearance while, under the bodywork, improvements have also been made to the suspension kinematics and chassis stiffness as we gear up for a more structured test programme later in the year. We have lots of important foundations to lay both with the car and the team at Alzenau. 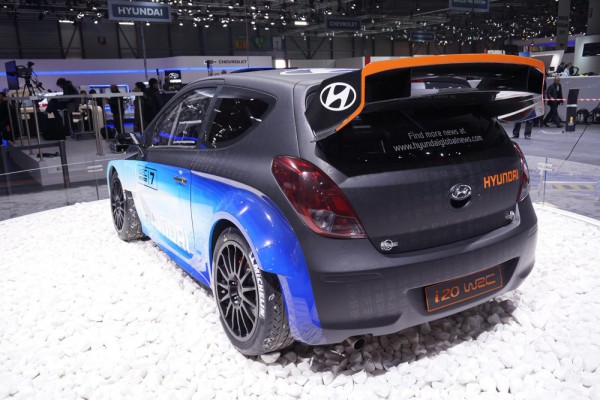 “Building up a new motorsport facility from scratch is an ambitious and rewarding challenge. We have begun the recruitment process but already have a number of key people in place who bring with them a wealth of rally and motorsport experience. We are rapidly building up the team infrastructure and are pleased that everything is running to schedule.

“Hyundai has returned to the World Rally stage to demonstrate its technical capabilities on one of the world’s most competitive stages. Our ultimate goal is to be victorious but we know that we have a lot of tough competition ahead of us. We will use this year to lay the solid foundations but hope to advance quickly as 2014 approaches.”